Home | Tyrone Through To Rackard Final

Tyrone Through To Rackard Final 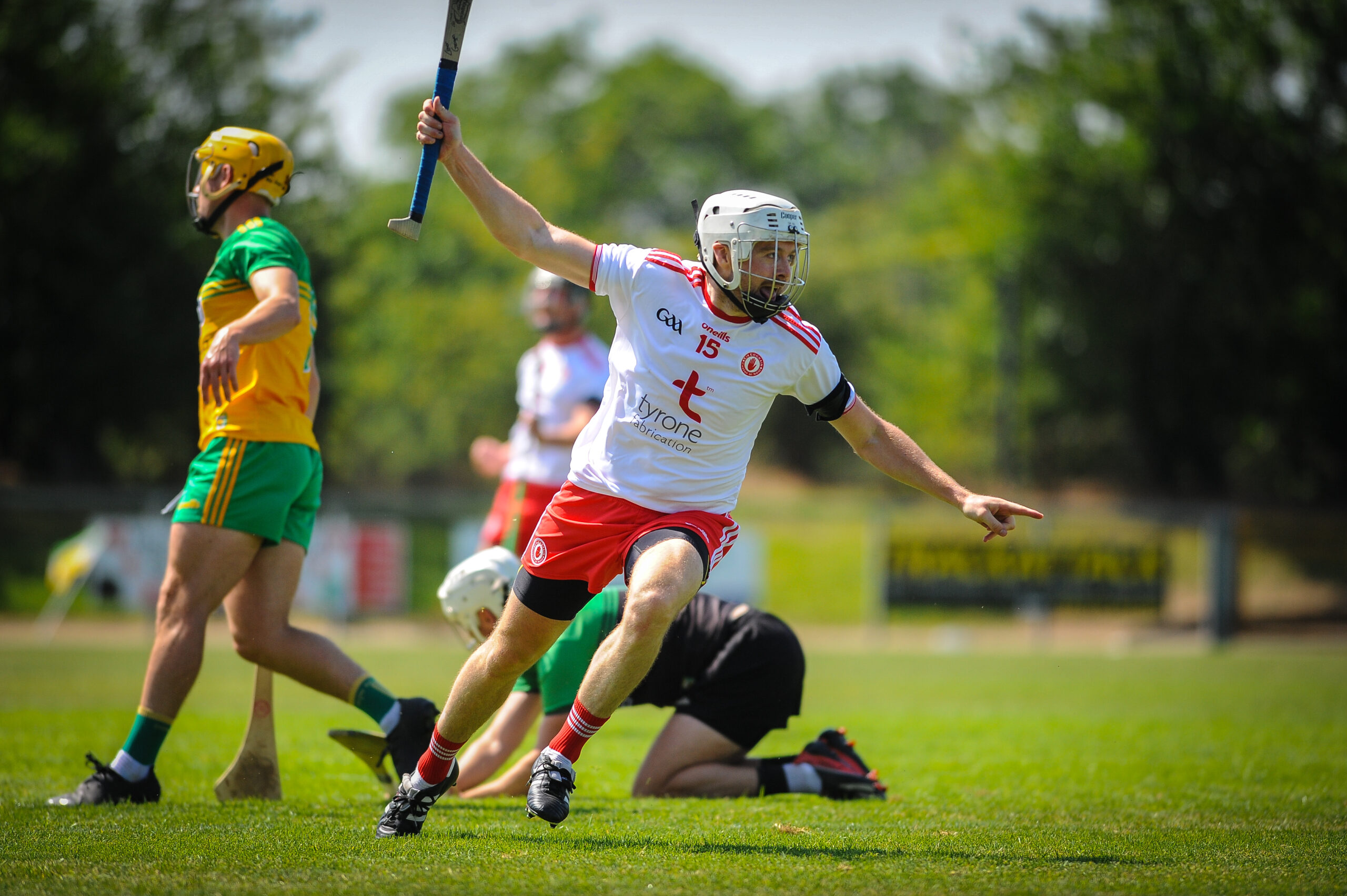 Pairc Colmcille Carrickmore has rarely looked better than it did on Saturday afternoon when it hosted the semi final of The Nicky Rackard Cup between neighbours and rivals Tyrone and Donegal. The white and red of Tyrone mixed with the green and gold of the Donegal men, on a perfect surface, in front of a large crowd, was the perfect backdrop for a top class game of hurling played with passion, commitment and heart. Tyrone took victory in the end after an absorbing contest winning 2-24 to 1-21.

With a place in the final at Croke Park next weekend up for grabs Tyrone began strongly and raced into an early four point lead 0-5 to 0-1. Rory Weir, Cain Ferguson, Damian Casey and CJ Mc Gourty with the points for the Red Hands. Ritchie Ryan responded for Donegal before Conor Grogan and Rory Weir exchanged passes to create a goal chance which Grogan buried in the net

This score seemed to arouse Donegal and with Declan Coulter and Ryan to the fore they set about narrowing the gap. With the first water break approaching Ciaran Mathewson netted and Coulter converted a free to leave a single point between the sides.

Coulter tied the game from a free straight after the water break but he then drove a penalty wide as Donegal began to get on top. A brace of points from Coulter and a fine score off the stick of Ryan had the visitors two clear with half time just around the corner. Fortunately for Tyrone it was they who finished the half strongest with Cain Ferguson (1-2) and Damien Casey (0-3) on the mark to leave the half time score 2-11 to 1-11 in favour of Tyrone.

The Red Hands faced a renewed Donegal onslaught in the second half but Tyrone goalkeeper Conor McElhatton was in inspired form as along with Kris Kearns, Dean Rafferty and Bryan Mc Gurk they denied Donegal numerous goal scoring chances.

The second half was something of a slugfest as both teams battled for supremacy. Donegal enjoyed much more possession but they just could not penetrate the Tyrone defence as Mc Elhatton and his colleagues put up a barrier that Donegal could not breach.

Both sides ran the bench as conditions began to take their toll on the players. Casey, Ferguson, Lorcan Devlin and Conor Grogan pointed before Ryan and Coulter replied once again for Donegal. Exchanges became heated as both teams fought for superiority and both sides finished the match a man down. Tyrone reached the second water break leading 2-17 to 1-15 as Casey and Grogan swapped scores with Coulter and Ryan. Lorcan Devlin and Casey added further points to extend the Tyrone lead but it was Donegal who created the better chances late on as the Tyrone goal led something of a charmed life in the closing quarter.

Time and again the ball was stopped or it came off the woodwork as Donegal went in search of the goals they needed. Dylan’s Lafferty and Coulter pointed to reduce the deficit but Bryan Mc Gurk fired over to extend the Tyrone lead 2-22 to 1-17. Sensing the game was getting away from them Donegal responded positively to the announcement of seven added minutes and hit four in a row to reduce the gap to four. Tyrone nerves became frayed but Kearns, Mc Elhatton and Rafferty hurled superbly to keep Tyrone ahead. Two late points from the stick of Damian Casey sealed the win and gave Michael Mc Shane’s team a place in next weekend’s final at Croke Park.