Tyrone Through To Ulster Senior Final 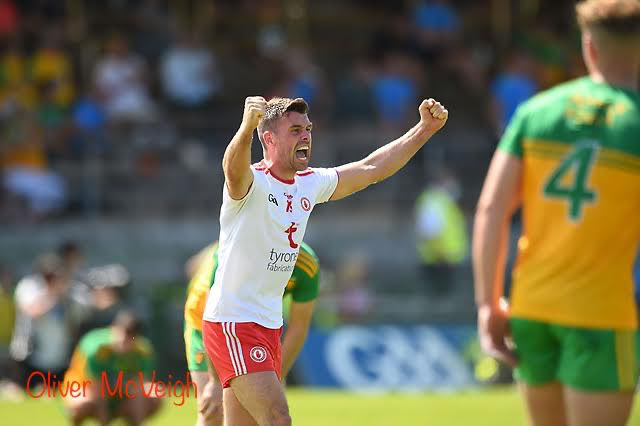 Tyrone are back in an Ulster senior football final for the first time since 2017 after a professional performance saw them overcome Donegal at sun drenched Brewster Park on Sunday afternoon.

The soaring heat made it tough on the players but both sides deserve enormous credit for the fare that they served up. Tyrone kicked 19 of their 23 points from play with the bench making a telling impact contributing five points to the haul. It was a superb all round team display with every player in a white jersey playing a part as they set up a Provincial shootout with Monaghan in two weeks time.

Tyrone led 0-9 to 0-8 at the end of a first half that provided plenty of talking points. With Donegal two points to the good in the 31st minute they were awarded a penalty and worse for Tyrone Rory Brennan was black carded for ten minutes. Michael Murphy took the spot kick but his effort hit the right hand post and went wide. It was a major turning point as five minutes late Murphy was black carded and having already picked up a yellow he was sent off. All of a sudden Tyrone had their tails up and three points in a row left them in front at the short whistle. Donegal had already lost Neil McGee to injury in the opening minutes and now they were up against it.

Tyrone stretched their advantage to three on the restart but then Donegal levelled matters with a goal against the run of play. Tyrone though didn’t panic and they hit back with a few points to take a lead that they were never to lose. Donegal though gave it everything despite being a man down and with five minutes left on the clock only the minimum separated the two sides. Tyrone’s game management though was of the highest order as they retained possession and made Donegal run all over the field in an attempt to get the ball and as Donegal tired the Red Hands kicked five unanswered points to see them safely through to the decider.

Kieran McGeary opened the scoring with a peach of a point from out on the right wing after only thirty seconds but by the 7th minute Donegal were 0-3 to 0-1 in front thanks to efforts from Jamie Brennan, Niall O’Donnell and Paddy McBrearty. Tyrone though began to settle and a Darren McCurry free was followed by a point from play from the same player after he was denied a goal by Shaun Patton. Niall Sludden and Peadar Mogan traded points as did Murphy and McGeary before Donegal enjoyed a good spell. McBrearty edged them in front before a Murphy free left it a two point game.

Then came that major turning point in the game as Murphy’s spot kick struck the post with Tyrone down to fourteen men. A goal then would have left five between the sides and perhaps Donegal would have gone further in front but that of course wasn’t the case. Tyrone got a lot of energy from that penalty miss and Brian Kennedy won the next kick out before feeding McGeary for another sublime score. McCurry then levelled from a free and seconds later Murphy was black carded for a trip on McGeary and Donegal had lost their talisman. Ciaran Thompson briefly put Donegal back in front but the superb Conor Meyler fisted the equaliser before McCurry had the final say of the opening half from a free.

The Tyrone management replaced Brennan with Tiarnan McCann on the restart, probably fearful of the Trillick man picking up a yellow, and McCann went on to play a pivotal role in the second half. The superb Niall Sludden opened the second half scoring with a great point from distance before keeper Niall Morgan went short with a long range free to McCann who confidently split the posts. In the 5th minute of the second half though Tyrone were rocked with a goal against the run of play as Eoghan Ban Gallagher and Ryan McHugh combined for midfielder Caolan McGonigle to blast to the net. Crucially though Donegal were never able to get their noses in front and within three minutes Tyrone had restored their three point advantage through the influential Mattie Donnelly, Peter Harte and Donnelly again, a sublime effort from out on the left wing.

Brennan narrowed the gap before Tyrone were denied a goal when Patton saved from McGeary after good work from Donnelly again. McCurry and McBrearty exchanged points before a Langan free and an O’Donnell effort from play left it all square going into the final quarter, 1-12 to 0-15. Conor McKenna was a big influence when coming on as well and he put Tyrone back in front for a lead that they were never to lose. McCurry landed a clinker from play only for McBrearty to cancel that out from a free but again Tyrone pushed forward with the impressive Frank Burns on target from distance.

McBrearty knocked over a free but Tyrone’s response was immediate via McCann from close range. There was no doubt that Tyrone had more in that tank at that stage with substitute Cathal McShane knocking over a free before McCurry and Sludden were both on target from play from distance. McCann had the final say with a point with his left foot as Tyrone eased into the decider.