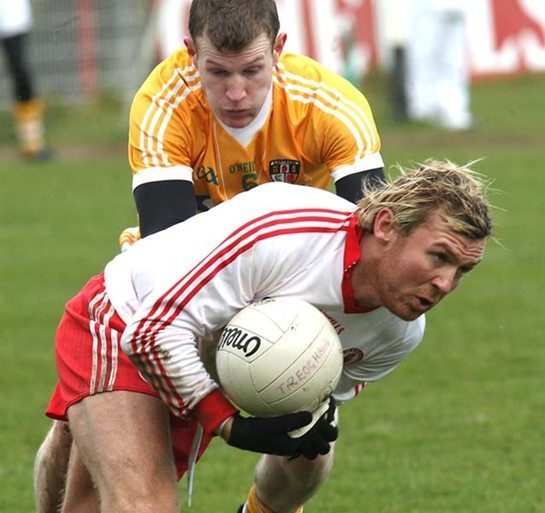 Tyrone began their league campaign with two defeats but have turned the corner with two wins in division two since then.  Trailing at half time they turned on the style in the second half to overcome Antrim in Omagh.

Tyrone made one change before the start with Dromore’s Sean O’Neill coming into the Tyrone defence for his first start of the season as PJ Quinn wasn’t fit to start.  Antrim made two changes of their own, James Laverty and Mark Dougan came into the Antrim starting fifteen in place of Anto Healy and Kevin Niblock respectively.

The Saffrons had the wind at their back in the first 35 minutes and settled quickly with a Paddy Cunningham converted free before Tony Scullion landed a long range point a short time later. Martin Penrose opened Tyrone’s account with a free in the tenth minute.

Tyrone playing into the biting wind added further scores through Penrose and Colm Cavanagh while Antrim chipped in with a Kevin McGourty score in the 21st minute.  A minute later Kevin Hughes fisted his first point before the Cavanagh brothers combined to see Sean fire low past keeper Chris Kerr.

Tyrone were well on top at this stage and Kevin Hughes converted two more points from play.  Paddy Cunningham slotted a couple of frees before Antrim took a shock lead through a Tomas McCann injury time goal.

The half time team talk revived Tyrone and with the wind at their backs they assumed control. Sean Cavanagh and Davy Harte wiped out Antrim’s advantage early on before Stephen O’Neill got on the end of a long ball in to fist over.