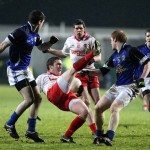 Once again the problems with broadband provision in Enniskillen caused mayhem for Teamtalk as we attempted to keep the updates fresh and current.

37 minutes played and Cullivan scores his second and his sides 14th point of the night but Tyrone qualify for the Final.

Into two minutes of injury time and Cavan go for broke but PJ Quinn breaks up the attack, O’Neill collects from Mc Guigan and knocks over a lovely score. Tyr 2-11, Cav 0-13

34 minutes on the clock and HUBBY knocks over a fantastic point .Tyrone now lead by three.

23 minutes played and Seanie Johnson narrows the gap to 1 point.

Ronan Flanagan from a free scores Cavan’s 12 point of the night from a free and O’Neill picks up a yellow card for Tyrone.

Stevie O’Neill can open his account with a free which would be more suited to a right footed free taker. Cavanagh just does not want to hit it. Tyr 2-8, Cav 011. O’Neill’s first score of the evening.

13 minutes and Sean Cavanagh’s first score of the night with a fine effort from 30 metres.

A great bit of team play and Mc Niece nets another Tyrone goal to lead 2-6 t0 11 points with 12 minutes gone.

Mark Donnelly runs through and is upended. Penalty for Tyrone and Penrose lines it up. Goes to the keepers right and it is a goal. Cavan are down to 14 men and with 9 minutes played Tyrone close the gap to two.

Mc Niece wins a free and Brian Mc Guigan misses another free for The Red Hands.

Tyrone trail at half time ten points to six following a first half of missed goal opportunities. Brian Mc Guigan, mark Donnelly and Martin Penrose all came close to netting for the red hands but two fantastic saves from James Reilly and the width of the post kept Tyrone at bay. Meanwhile the Breffni men capitalised on their good fortune with fine play from Seanie Johnson and Ger Pierson in particular causing the tyrone defence all sorts of problems.

Tyrone have made two changes with Ronan Mc Nabb and Ciaran Girvan both replaced by Ryan Mc Menamin and Stevie O’Neill although neither O’Neill nor Sean Cavanagh looking all that confident. Once again poor broadband coverage is causing major difficulties for our coverage and updates.

The same player rounds PJ Quinn to bring the sides level with the next attack. Four a piece with 15 minutes on the clock.

Cavan respond well and with 14 minutes gone a Seani Johnston point closes the gap again to a point.

12 minutes in and a Mc Nally pass finds Brian Mc Guigan in space and the Ardboe man splits the posts. Tyr 0-4, Cav 0-2

Good play by Cavan results in a Keith Fanin point from play to narrow the gap to one point.

Into the 8th minute and Seanie Johnstone gets Cavan’s first score of the evening from a 13 metre free. Tyr 0-3, Cav 0-1

While their team mates enjoy the light rain, Colm Cavanagh and Kyle Coney take their places in the crowd to watch tonight’s game. I am sure Mickey Harte would love to have both players available for selection considering how few forward options he has on the bench. Still no sign of the Cavan team.

Referee for tonight is Damian Helferty of Monaghan. Tyrone out warming up in the rain, still no sign of Cavan or the match officials.

On a very wet night in Enniskillen, there is quite a small crowd assembling in Brewster Park and with the rain falling persistently the surface will be tricky to say the least. Tyrone show several changes from Sunday’s National League game against Derry with Ronan Mc Nabb getting his first start of the season.