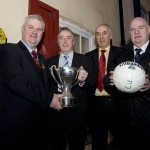 Apologies for no second half service but we had absolutely no broadband coverage from Brewster Park and could do very little about it. Tyrone won in the end 2-11 to 11 points with Ciaran Girvan slotting home a goal five minutes into the second half. Marty Penrose and Brian Mc Guigan were the pick of the forwards while Ciaran Girvan battled gamely throughout. Defensively Cathal Mc Carron was outstanding and Tyrone can now look forward to their final group game on Saturday night against UUJ. That game is in Omagh at 7:30pm and, broadband permitting, we will bring you live updates.

35 mins and corner forward Terry O’Flanagan brings the sides level again with a fine free from out on the right. Fermanagh 0-6, Tyrone 1-3.

First change of the night as corner back Niall Bogue is replaced by peter Sherry.

31 mins and Martin Penrose slots over another left footed free following a foul on Sean Cavanagh. Tyrone now lead by a point.

28 mins and all is forgiven as Brian Mc Guigan is fouled in the small square and Martin Penrose slots it into the left corner to draw the sides level. Fermanagh 0-5, Tyrone 1-2.

Referee Pat Mc Eneaney is not endearing himself to Tyrone supporters with some of his decisions.

26 mins and a foul on Brian Mc Guigan, up steps Marty Penrose to swing over Tyrone’s second score. Fermanagh 0-5, Tyrone 0-2

24 mins and Paul Ward extends Fermanagh’s lead further with a fine finish from wide on the right.

16 mins glorious chance of a goal from Fermanagh full forward Tomas Corrigan as Tyrone struggle to clear the ball.

8mins Fermanagh full forward Corrigan pops over the opening score from a 30 metre free. Fermanagh lead a point to no score

6min Kevin Hughes lands the first wide of the evening from 40 metres.

first 45 of the evening after four minutes, the highlight so far being a point saved by Tyrone keeper Mc Connell. Fermanagh missed the 45 and in the counter attack Mark Donnelly struck the post from 7 metres.

On a cold night in Enniskillen in front of a large crowd, Tyrone show two changes for their second McKenna Cup Game. Corner back PJ Quinn is replaced by Aidan Mc Crory who had an impressive debut against Donegal while for the second game running former All Star full forward does not start. His place is taken by Carrickmore’s Mark Donnelly who top scored with 1-1.