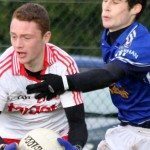 With celebrations well on the way in both St Joseph’s Coalisland and St Ciaran’s Ballygawley after their victories in the U14 and U16 finals on Wednesday attention now turns to the Tyrone Vocational County team who play Monaghan in the rearranged Ulster semi-final in Donagh, County Fermanagh this Friday 28th January at 1.30pm. With victory over Cavan under their belts on 28th November last year Tyrone now face a Monaghan team who have been very successful in this competition over the past few years. Hence the side captained by Enda McGahan and managed by Brian McGuckin, Richard Thornton and Declan O’Neill are under no illusions as to the size of their task on Friday. The Tyrone panel is named below: