It was a disappointing day for Brian Mc Guckin and his team as they suffered a four point defeat to Ulster Champions Monaghan at Donagh today losing out on a 2-12 to 2-8 score line.

Tyrone had started the game on fire and led 0-4 to no score after twelve minutes but a fortuitous goal just before half time allowed the Monaghan men to edge ahead by a point at the short whistle. In fairness the Farney county were the better team in the second half and in spite of the best efforts of Shay Coney, Michael Cassidy, Daniel Mc Nulty and Nial 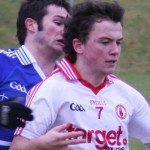 l Ward Tyrone could just not close the gap. A converted penalty for Tyrone in the thirty first minute left just a goal between the teams but as Tyrone pushed for another goal to draw the game level, Monaghan hit them on the break and popped over the final score of the game to extend the winning margin to four points.

Monaghan are now through to to the Ulster Final where they will face Donegal.