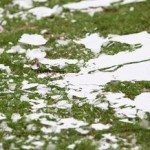 The return of the recent cold spell is playing havoc with the GAA fixtures and the latest game to be postponed is the Ulster Bank Inter County semi final between Tyrone and Monaghan which was scheduled for tomorrow in Donagh. The game was called off following a pitch inspection on Thursday and has been refixed for Friday 28th January at the same venue with a 1.30 throw in. Donegal await the winners in the final which will be played a week later.