Kellys Inn is the venue on Monday night for the second annual Tyrone U16 Vocational All Star Awards ceremony with things getting underway at 7.30pm.

Last year’s inaugural awards proved to be a superb success and Holy Trinity teacher and Tyrone great Peter Canavan is expecting this year’s ceremony to be just as good.

“Last year was the first season of the awards and it was a great night and no doubt Monday night will be similar and we are expecting a good crowd. The lads who won the awards last year greatly appreciated them and I believe it’s a great scheme and a good way of rewarding lads who not only played well this season but throughout their school careers.

All schools who took part in the U16 championship will be represented with the two finalists picking up three awards each, the two losing semi finalists two each and all the others one apiece. All fifteen players will receive a specially commissioned vase as well as a full Tyrone kit and I would like to take this opportunity to thank Kieran Kennedy and O’Neill Sportswear for their sponsorship as without them an event like this wouldn’t take place.”

No doubt the awards are much sought after and you can find out the 2010/2011 All Star team as well as view photos on this website tomorrow night. 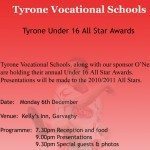