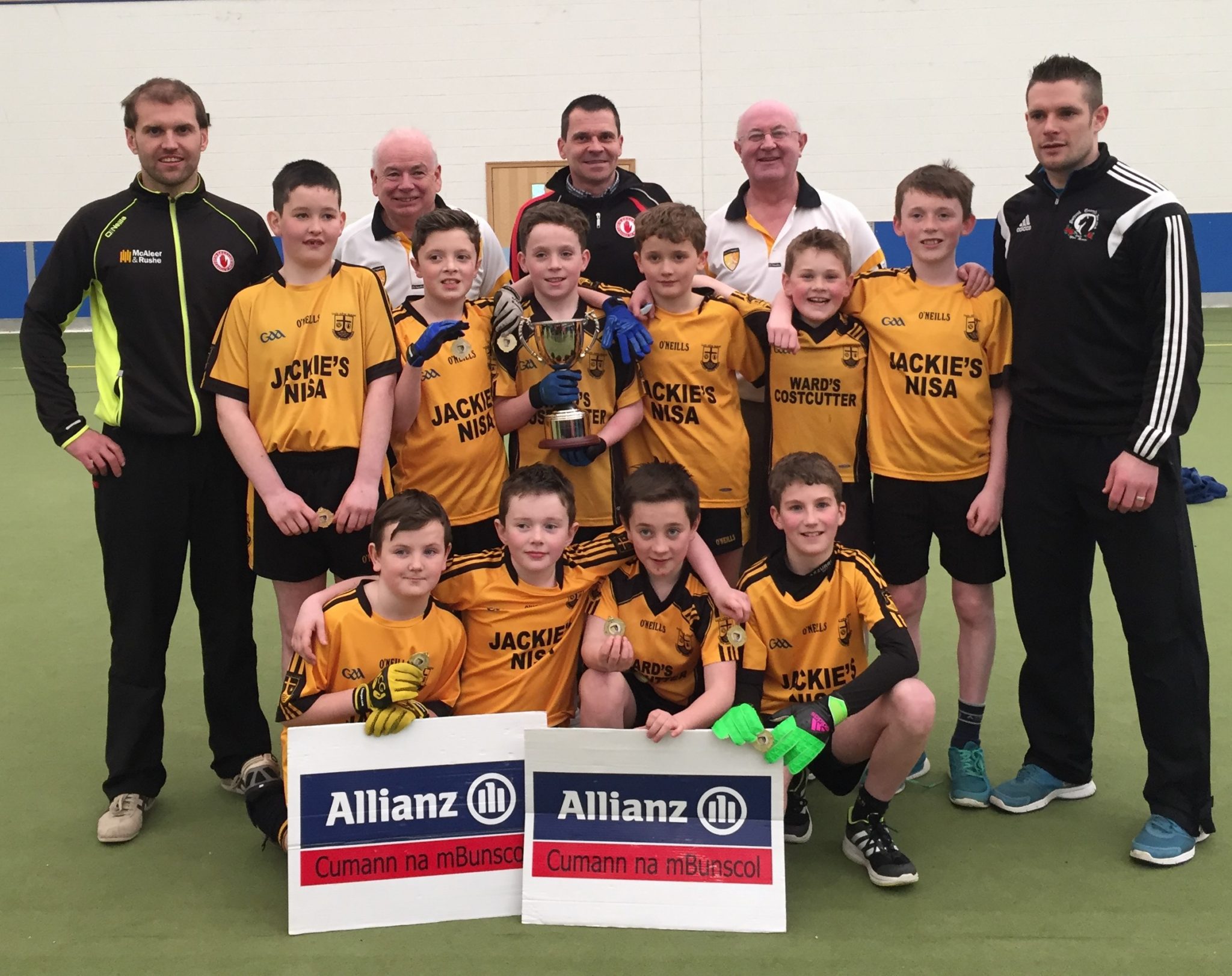 Allianz Cumann na mBunscol Uladh held their eagerly awaited Ulster Football Finals for Girls and Boys in the magnificent Meadowbank Sports Arena, Magherafelt, Co. Derry. Schools from right across the province sent their respective county champions to do battle in an attempt to capture the coveted Ulster title in each code. Tyrone had two representatives going in as county champions – Carrickmore girls and Loughmacrory boys. Hopes were high that these two talented teams could put up a good showing of their undoubted skills. These hopes were to be realised in spectacular fashion… 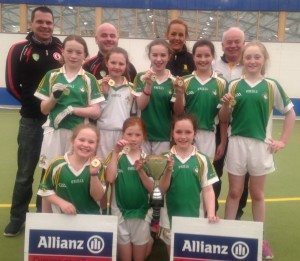 First up, the girls from St. Colmcille’s P.S. Carrickmore (defending Ulster Champions 2015) found themselves in a section that included the champions from Derry and Armagh. Their title defence didn’t get off to the best of starts when, despite scoring two goals, they fell to St. Trea’s P.S. Ballymaguigan (Derry) 3:02 to 2:00. However, a 1:02 to 1:01 win over Derrynoose P.S. (Armagh) secured a semi-final berth, albeit against the table-toppers from the other section: Holy Child P.S. Belfast (Antrim). The Carmen girls weren’t to be overawed as they emerged victorious on a 2:03 to 1:02 scoreline to reach the Ulster Final. Here they would meet St. Trea’s P.S. who had beaten them earlier in the group stages. The prospect of revenge, coupled with a determination to hold on to their crown, would prove decisive factors when the teams met again.

After an absorbing encounter, it was the Carrickmore girls who showed their renowned battling qualities to capture the prestigious prize on a scoreline of 2:02 to 1:02. Thus, the Tyrone Champions had achieved a truly remarkable back-to-back Ulster Championship title. Huge credit must go these Carmen girls, and team mentors Emmet O’ Neill and Sarah McElroy, on their continued success story. They are an absolute credit to themselves, their families, club and school.

Next on the agenda was the Boys’ Football Final and the turn of the Loughmacrory lads from St. Teresa’s P.S. – no pressure then! The draw saw them paired with the champions from Derry and Armagh – just like the girls’ draw. History seemed to repeat itself when the Tyrone school succumbed to a narrow opening game loss against St. Brigid’s P.S. Mayogall, Lavey (Derry) on a 2:02 to 1:02 scoreline. However, they shook off their first game nerves when they put Crossmaglen (Armagh) to the sword in a convincing 2:03 to 1:01 win. In the semi-final, Loughmacrory would meet a hitherto unbeaten Burren (Co. Down) side. Another power-packed performance saw the boys from St. Teresa’s carve out a narrow 2:01 to 1:03 success in an enthralling match. Sights were now set on the final.

With echoes of what the Carmen girls did earlier, fate decreed that Loughmacrory would again meet the Lavey lads from the host county, Derry. The question was, could they emulate what Carrickmore had done earlier? Seven minutes of non-stop helter-skelter football would reveal the answer…

A proverbial ding-dong of a final ensued with goals and points aplenty. As the final whistle sounded, the final scoreline read 2:02 to 1:03 in favour of the Loughmacrory lads from St. Teresa’s P.S. Parents, club officials and team mentors Mark McCullagh and Mickey Gallagher savoured the moment, basking in the glory of an unprecedented school accomplishment.

Thanks to Allianz Cumann na mBunscol Doire for hosting today’s terrific event. Our appreciation also to referees, umpires and Ulster officials for their efforts. Finally, congratulations to our triumphant teams from Carrickmore and Loughmacrory. You are worthy Ulster Champions and tremendous ambassadors for the O’ Neill county. One gets the feeling there’ll be no homework for a while – and rightly so. Days like this are to be cherished and will live long in the memories of these young stars from the proud parish of Termon. Enjoy your terrific achievement. Tír Eoghain abú!