Tyrone All County League Division 3 Wrap Up in association with Steelweld Fabrications Ltd.

Killyman made the long run to North Tyrone to take on Glenelly but came away empty handed in spite of taking a forty second minute lead courtesy of Niall Mc Alinden’s converted penalty. The teams were level at the break 0-4 apiece with Enda Mc Gahan and Mickey Donnelly on target for the visitors. However scores from Colm Hicks and Seamus Harkin ensured the teams went into the break level. Killyman moved two in front following that second half penalty but scores from Harkin, Shayne Devine and Kevin Mc Connell ensured the points remained in North Tyrone. Final score Glenelly 0-13, Killyman 1-7.

Old rivals and near neighbours Newtownstewart and Drumquin produced a real thriller on Sunday before Newtown emerged 4-9 to 1-14 winners. Ryan Mayse and Brendan Boyle hit a brace of goals each for Newtownstewart while Paul Sheridan landed a three pointer for Drumquin. Newtownstewart reached the break leading 2-8 to 1-5 and virtually sealed the win when Mayse bagged 1-1 in the opening minutes of the second half. Strangely they would only score once more in the second half and that was a goal from Brendan Boyle. Drumquin did stage something of a comeback with Eamon Teague driving the Tones forward as they landed six second half points in a row despite playing most of the second half with only fourteen players.

Goals win matches and so it proved between Tattyreagh and Clogher on Sunday. The Tatts found the net three times over the course of the hour and one of those majors proved to be the difference between the teams at the end. The home side trailed 2-7 to 0-7 at the break but came back well in the second half to narrow the gap to a single score at the end. Ryan Mc Caughey (5), Martin Short (1-1), Fergal Mc Kenna (1-0) and Ciaran Shields (3) provided the majority of the scoring threat for Clogher for whom Connor Mc Caughey, Sean Mc Caffrey, Marc Mc Connell and Michael Mc Caughey worked hard. Once again Tattyreagh’s young guns stepped up to the mark with James Darcy, Robert Porter and Eoin Mc Ginn hitting 3-3 between them. Johnny Harkin, Duncan Hyndman and Chris Mc Carroll were others to show well for the winners. Final score Clogher 2-12, Tattyreagh 3-12.

It was back to earth with a bang for Dregish following their four point defeat at the hands of North Tyrone rivals Owen Roes. The Roes led 0-8 to 0-5 at the break and maintained control throughout the game. County man Cathal Mc Shane finished with 0-10 for the winners while Mark O’Neill’s second half goal was central to their win. Aidy O’Kane and Tony Quinn bagged five points apiece for the Pearse Ogs but it was not enough to deny a Seamus Dooher inspired Owen Roes team their second league win of the season.

Castlederg made the long run to the lough shore but showed considerable spirit to earn a deserved two point win. Brocagh had in fact led 0-6 to 0-5 at the break but the Derg restricted the Emmetts to three points in the second half to edge a very competitive game. Bradley Devine, Stefan Gallen, Niall Catterson, Conor Mc Callion and Sean Harper registered the Derg scores during the first half. The visitors showed considerable grit in the second period to match the home side in endeavour and commitment. Mark Corry, Aiden Lynch and Jack Ramsey were on target for the winners in the second thirty minutes during which the Derg defence played superbly especially goalkeeper Paddy Lynch. Final score 0-11 to 0-9 in favour of Castlederg who now sit joint first in the table. 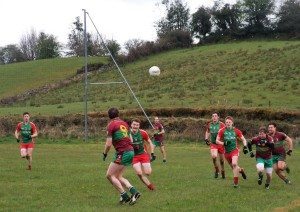 Clan na Gael were forced to withstand a concerted Beragh comeback before the North Tyrone side emerged  narrow one point winners in a very hard fought encounter. Damien Ball top scored for the homeside with 1-5 while Michael O’Neill also contributed handsomely landing 0-4 for the winners. Eddie Molloy (0-5) was the Red Knights’ main scoring threat while Conor Mc Namee, Hugh Franey and Jack Campbell all landed points for their side. Beragh were 0-7 to 0-6 up at the break and will feel they should have taken something from this one.

Table toppers Killeeshil made it three wins from three starts when they defeated Rock by two in a very competitive Division Three game. Aidan McGarrity top scored with 0-4 for the home side while Conor Mc Creesh (0-3) and Diarmad Carroll (0-2) were also on target. Cathal Skeffington bagged the all important goal for Killeeshil while veterans Shane Mallon and Packie Mc Mullan contributed six points between them for the winners. 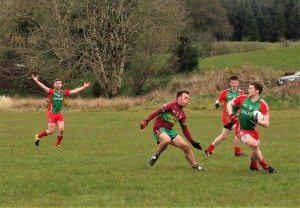