Fianna remain on course for Double

Coalisland remain on course for the double after seeing off the challenge of Dromore in a highly competitive league semi final at Father Campbell Park on Saturday afternoon. The visitors established a 0-3 to 0-1 lead by the end of the opening quarter thanks to well taken points from Shaun O’Neill and midfielder Mickey Garry. Stephen Curran and Dermot Thornton had Fianna points but it was Dromore who led 0-5 to 0-3 at the break after Colm McCullagh had knocked over a free. 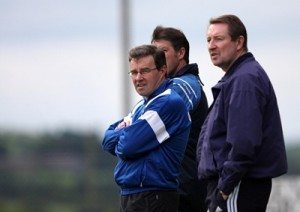 Six minutes into the second half Dromore were dealt a blow when full back Cathal McCarron was sent off for a second yellow card offence following a foul on Tiernan O’Hagan.  By that stage Coalisland were on level terms thanks to efforts from Philip Toner and Thornton before the former edged them in front. Curran then put the hosts two in front but a brace of frees from McCullagh left it all square with ten minutes left to play. Coalisland substitute Richard Thornton then made an immediate impact with a fisted point before the same player clinched the vital goal six minutes from time when he palmed to the net after good approach play from O’Hagan. To their credit Dromore played to the final whistle with McCullagh and Eoin McCusker getting points but Coalisland held on.