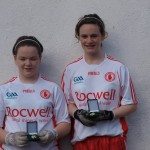 Later on today in San Diego the large contingent of Irish supporters will get the chance to really get behind their countrymen and women on the final day of The North American Junior 4 Wall Championships. There have already been some notable Irish successes and from a Tyrone point of view Aoife Kelly’s victory in the Girls’ Under Thirteen tournament was well worth celebrating. Played on a round robin basis the Loughmacrory youngster remained unbeaten throughout and emerged victorious following her final game win over top seed Myroslava Koval from Calgary.

In the Boys’ Under seventeen section Conor Mc Elduff exited at the semi final stage losing to top seed Brant Bidegain who now goes into this evening’s final as favourite for that particular title. The tournament for Conor however is far from over as he still has the small matter of the Under 19 Doubles final to look forward to following a semi final win for himself and team mate Caolan Daly. Their Doubles final is scheduled for today at 12:00pm local time. It is going to be a very busy day for the Carrickmore man as he has also made it through to the Boys’ Under 19 singles final which, as we had predicted, turns out to be a repeat of the Irish Nationals Final in November. Caolan will face Mayo man Stephen Cooney in that one and it is down for decision at 10:00am local time.

Further Tyrone success is hoped for when young Brackey star Pol Clarke competes in the Under 15 Doubles final with his partner Tyler Stofell with their game down for decision at 1:00pm local time.  Fingers crossed the Red Hand lads will add to Aoife’s title and return to Ireland with North American titles to their names.