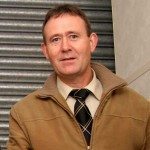 As Augher prepare for the 2010 under-21 grade 2 championship final, we take a look back to a time when another crop of young Augher players made their mark at the highest level in Tyrone football. Back in 1976, Dessie McKenna was one of the stars of an Augher side that took Tyrone football by storm. Dessie now looks back to that breakthrough 34 years ago….

Back in the seventies both Ardboe and Carrickmore succeeded in winning three Tyrone senior championship titles in a row while Trillick weighed in with two during the same decade but there was another club who came through and shared the limelight with the big guns as they made the breakthrough to lift the coveted O’Neill Cup.

Augher St Macartans won their first county title in 1976 and it was to be the beginning of a golden era for the club as they went on to add another two in 1982 and 1985.

Dessie was the man that lifted the O’Neill Cup as the St.Macartans at last reached the Promised Land after a couple of near misses.

“Augher had lost out to Eglish in the final in Dungannon in 1970 on a day that we gave away two soft goals,” reflects Dessie.

“A few of the team retired after that defeat and a couple of weeks later I made my debut for Augher seniors against Ardboe in the McGarrity Cup, a competition that was then played for between the four sides that had reached the championship semi-finals. I was only fifteen but managed to score four points off Mickey John Forbes and I remember him hitting me a box on the jaw near the end of that game!”

That didn’t prevent Dessie from going on to enjoy a superb career with both club and county. He captained Tyrone to All-Ireland minor success in 1973 as part of a team that included his brother Eugene as well as Augher teammate Tony Marlow. That year Tyrone completed the clean sweep in Ulster for the first time as they added the under-21 and senior titles and that same season signalled a return to the county final stage for the St Macartans against an Ardboe side going for three in a row.

“We were a very young side that year with just a few old hands on board,” continued Dessie, “and we did well to reach the final. We had beaten Omagh in the semi-final and the final wasn’t played until three days after Christmas owing to Tyrone’s success.

“It was an awful day in Pomeroy and I feel that if we had got them on a better day at a different time of year the result may have been different. We were a bit naïve while they were a big, strong, physical side with Frank McGuigan their key player and we had no answer to them.”

This Augher team weren’t going to go away though and three years later, 1976, they were back again making a concerted effort to win the blue riband event in Tyrone club football.

Dessie recalls that they had to pull out all the stops to get the better of Donaghmore in the semi-final.

“We were without my brother Willie who was in England at the time and it was a game where we didn’t play well until the last fifteen or twenty minutes as we recovered from seven points down. I remember going to see the other semi-final between Ardboe and Trillick and when Ardboe won some of them said that they couldn’t wait to get at us in the final.

We were without Paul Donnelly for the final as he had broken his leg while playing for Tyrone minors and that was a big blow for us but we used it to spur us on.

Tom McKeagney was way ahead of his time and he helped devise a plan to counteract Frank McGuigan’s influence in midfield. Willie and myself were to go to either side for the kickouts and whatever side Frank went to the ball would go to the other wing. It was simple but it worked a treat and we won the game with all of our scores coming from play, which was unusual for a final.

“Youth and exuberance coupled with organisation helped take them by a surprise as they were raging hot favourites. I remember Cookie McKenna had scored 1-1 against them in the league a few weeks earlier and they put Patsy Forbes and Mickey John Forbes into the two corners to mark him and Seamus McGirr and that played right into our hands as we got through for three goals. It was an absolute colossal day for Auger and great to be part of it all.”

The following year Augher fell at the first hurdle when they leaked four goals against a talented Owen Roes side and that signalled the start of a few lean years for the St Macartans. The likes of Tom McKeagney, Tom Cassidy and Father PJ Gormley retired, Eugene McKenna went to the states, Shay Daly went to England and Dessie himself was on the sidelines after hurting his back. All of that helped to relegate Augher in 1979.

“That was a major disappointment,” says Dessie, “but we had a small panel of players and it was difficult to cope with losing one or two without as many as we did. There is no doubt in my mind that particular team should have won more county titles as we lost a couple of semi-finals as well.

“We did manage to bounce straight back in 1980 when winning the Intermediate league although we lost by a point to Stewartstown in the championship final. I only came on as a sub that day as I had hurt my ankle playing for Tyrone against Cavan in Clones and it was a day when nothing went right for us although you can’t take it away from Stewartstown.”

The St Macartans were on the march again and the influx of badly needed new blood was there with the likes of the Conlons (Francie and Fergal) and Connolly brothers (Aidan and Paul) as well as Stephen Rice, Dermot Monaghan and Brendan McKenna now on board along with the survivors of the ‘76 team. It didn’t take them long to gel and within two years of winning promotion they were top dogs in the O’Neill County again after accounting for Dromore in the showpiece at Carrickmore.

“The county final with Dromore must have been one of the worst to watch in years but we didn’t mind as long as we got the right result. We ground out the result but Dromore were very naïve. If they had played any football at all they might have done better, but they tried to rough it up and of course that played right into our hands. Willie and Brian McGinn completely blotted out their scoring threat of Tommy Fiddis and Ciaran McElduff.

“Moy beat us in Dungannon in the first round the next year in a very poor encounter where they did nothing but pull and drag all day. Back in those days there was no dominant force and the championship was very open and that’s how we managed to more than hold our own.”

A third title was delivered in 1985 when surprise packets Gortin were put to the sword in what Dessie describes as another dour encounter.

“They looked impressive when beating Eglish in the semi-final but we were ready for them. I was playing at full back but I was to mark Liam Reilly wherever he played. They played into our hands by playing him at full forward and that meant that we didn’t have to change our team about. They had hammered us earlier in the league and perhaps underestimated us a little in the final.”

Twelve months later Eugene McKenna captained Tyrone in their first All Ireland senior final appearance but Augher couldn’t retain their championship crown, although a first ever senior league title went some way towards easing the pain. That proved to be the end of a glorious era for the club as experienced players hung up their boots and there weren’t sufficient young players coming through to take their place.

Dessie himself was forced to retire through injury in 1988 but not before that particular Augher team had one more dying kick in the championship.

“We played an up and coming Carrickmore team in Beragh and outsiders didn’t give us much of a chance but we went through after a replay. They were two hard fought encounters and that was to be the last time that I would play as I injured my knee. Winning that night was nearly as good as winning a championship final as we showed we still had it in us against a young side.

“We met Clonoe in the next round but we just couldn’t handle them in Dungannon. After that things started to drop away but hopefully we can return to senior football in the future.

“They were great times but on the other side of the coin perhaps we were too successful for our own good. By that I mean that the bar had been perhaps set too high. By right, half a parish shouldn’t have been winning championship titles against the bigger clubs.

“Players that have played for the club since then have had a lot to live up to and I don’t think that it’s fair to compare them with past teams. We had one or two special players of a high standard and that’s what makes the difference, all the rest of the players respond and listen to them.

“There were some great characters on those teams, lads like Tom Mc Keagney, Tom Cassidy, Marty Owen, and Cookie. Cookie always sang on the bus to and from matches. I remember Brian McSorley coming to play for Augher in later years. He was a big man while Cookie was small and I remember Cookie looking up to him one night and saying to him ‘I’ve a championship medal and you haven’t.’ That was Cookie and now the two men in question are sadly dead,” concluded Dessie.

Great recollections from a man who was no mean footballer and is a name that will always be remembered in the annals of Tyrone football.