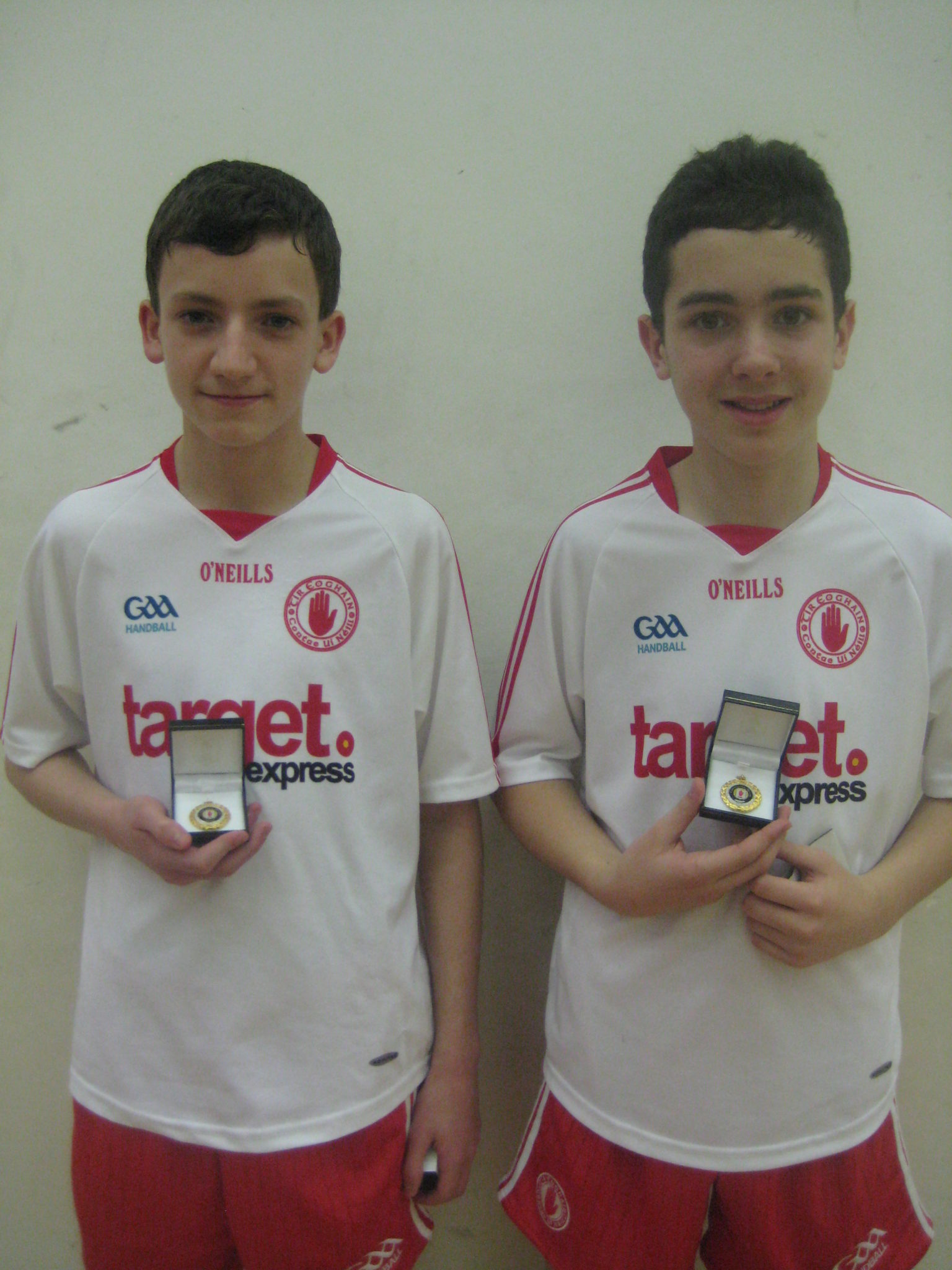 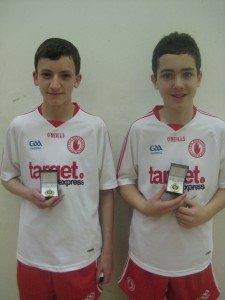 Tyrone qualify for five All-Ireland finals….
On the same weekend that Paul Brady produced a stunning exhibition in Roscommon to retain his All-Ireland senior singles title, some of Tyrone’s best young players were making a name for themselves closer to home by qualifying for the 2012 All-Ireland juvenile 40×20 finals.
Some of the best action took place in Beragh last Sunday as Tyrone made it through to three national finals courtesy of Sean Kerr (under-14 singles), Matthew McCartan & Shane McCrystal (under-14 doubles), and Johnny Woods & Ryan Mullan (under-16 doubles).
Sean Kerr was impressive in his semi-final win over Galway’s Cian Ó Conghaile, winning 2-17, 21-10, and Brackey‘s exciting young talent will now face Tipperary’s Jason English in the All-Ireland decider in Kilkenny on Sunday 8th April.
Tyrone are still in the running for a clean sweep in the boys under-14 competitions following a thrilling doubles semi-final victory for Matthew McCartan and Shane McCrystal over Mayo’s Declan Cosgrove and Michael Mulhern. The Brackey / Loughmacrory combination suffered an agonising one point defeat in the opening game but came back in style to win the next two games, 15-11, 15-8.
They will now take on Limerick pair, Nigel O Callaghan and Evan Murphy, for the All-Ireland title.
The Brackey / Carrickmore partnership of Johnny Woods and Ryan Mullan went into their under-16 semi-final encounter as favourites to progress and they overcame the tough challenge of Mayo’s TJ Byrne and Shane Walsh. They won it in two games but were pushed hard by the Connacht champions, eventually winning 21-15, 21-16.
Johnny and Ryan now go forward to meet Kilkenny’s Emmet Landy and Brian Mahon in the All-Ireland final in O’Loughlin’s on Sunday week.
Tyrone could yet reach another final in the boys section as Jack Campbell and Pauric Mullan prepare to team up to tackle Galway’s Jonathan Ó Diréan and Séan Ó Maoilchairáin in the under-15 doubles semi-final this Saturday in Beragh.
Meanwhile, in the girls’ competitions, Tyrone will be represented in two All-Ireland finals in Kilkenny on Sunday 8th April, with Aoife Kelly and Maeve McElduff preparing to meet Clare’s Natasha Coughlan and Michelle Nihill in the under-16 doubles decider, and Zara Girvan coming up against Kildare’s Kate Dagg in the under-17 singles final.

Meanwhile, Tyrone’s minor doubles pairing of Pol Clarke and Gabhainn McCrystall will stake their claim for the All-Ireland minor doubles title in an exciting programme of games in Cappagh, County Limerick, on Saturday 7th April, commencing at 12.30pm. The Brackey pair will take on Clare’s Colin Crehan and Niall Bolton in the decider.

Finally, congratulations to the young Tyrone students who were successful in four of the Ulster Cumann na mBunscol finals in Belfast last Saturday. Lorcan McBride won the under-11 singles title, Ronan Curran and Antoin Fox won the under-13 doubles title, and in the girls competitions there were provincial successes for Ciara Mullin (under-13 singles) and Emer Kerr and Elizabeth McGarvey (under-11 doubles).