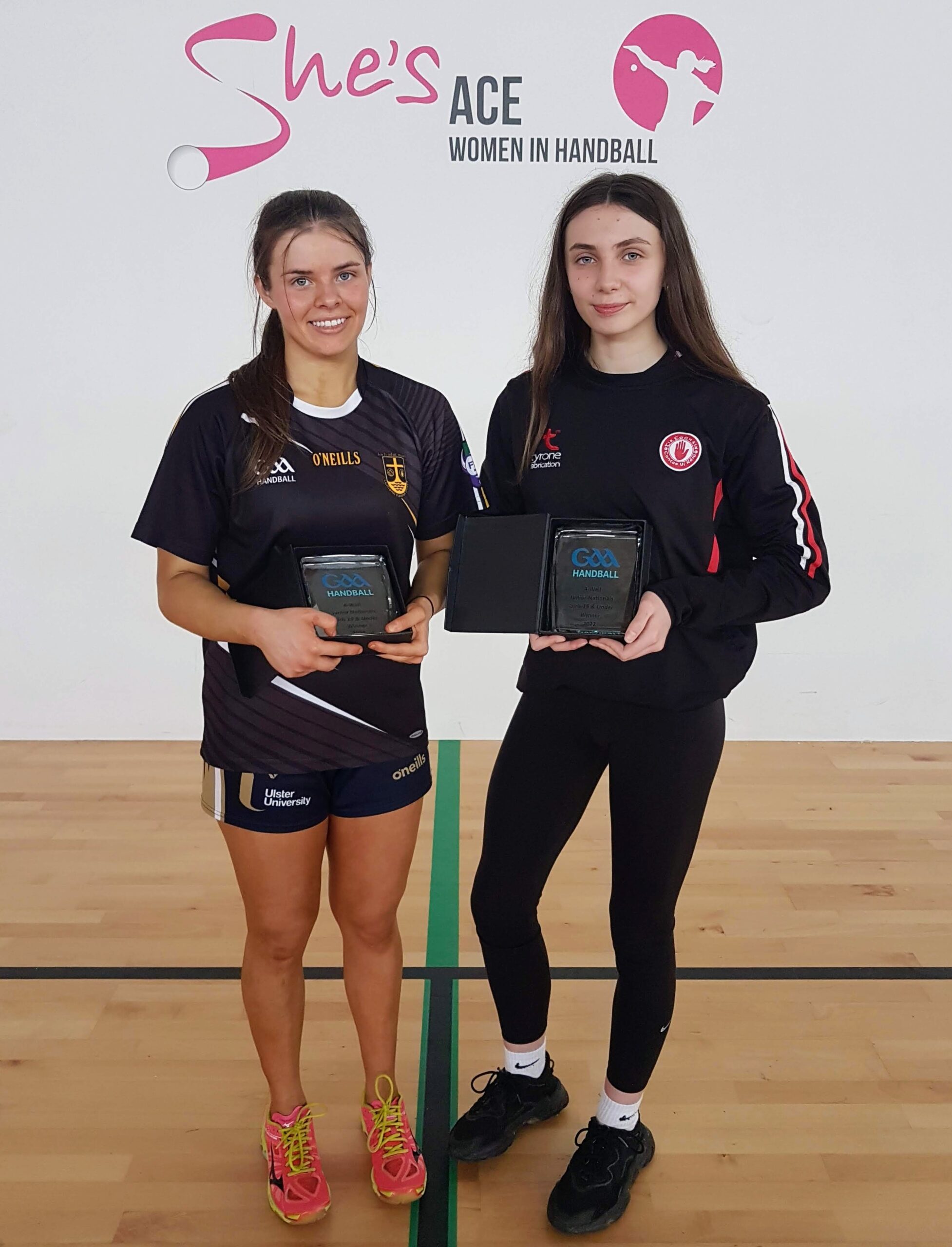 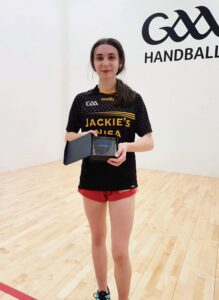 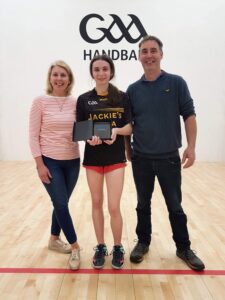 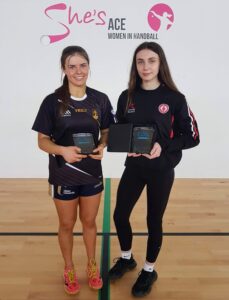 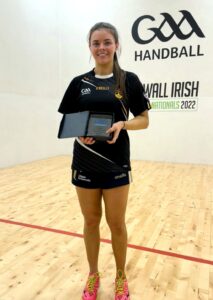 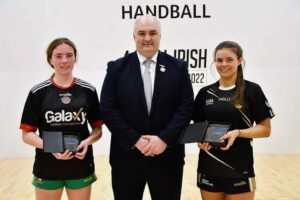 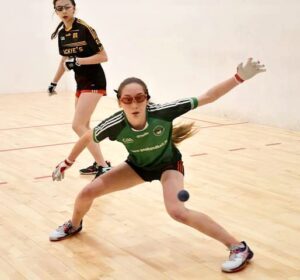 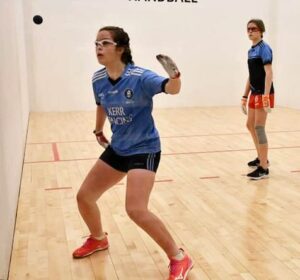 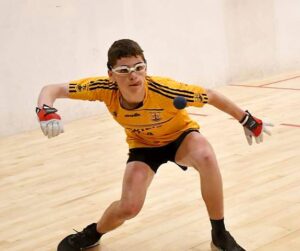 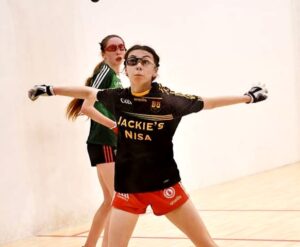 Tyrone enjoyed a successful weekend in the 2022 Irish junior nationals as the county secured three of the eight grade A titles on offer in Breacach on Sunday.
A packed programme of quality fixtures took place across County Tyrone and North Monaghan throughout Saturday and Sunday and in the end it was down to Mairead Fox, Laura Duff and Keeva Owens to ensure the home county was well represented on the final roll of honour.
It meant that Tyrone had picked up three of the four grade A girls titles and the county was also represented by Cloda McNamee in the 17 and under final but it was not to be for the Carrickmore player against Clare’s Leah Manogue.
Lucy McCullagh and Karla Corcoran also reached the semi finals on Sunday morning, while Laura Delaney was a very unlucky runner up in the 15B final.
Tyrone didn’t feature in any of the boys grade A finals with Cathal Farley (13&U) and Cahir Munroe (19&U) getting closest by reaching the semi final stages. The clash with the Tyrone football feile on Saturday didn’t help the Tyrone challenge as it affected players from five different clubs.
Others like Gary McAleer, Ciaran McCrystal and Ruairi Kerr bowed out at the quarter final stage of really competitive grades.
In the B competitions, Loughmacrory’s Padraig Fox came closest to going all the way when he came through four rounds at 15 and under before suffering an agonising 11-10 tiebreaker defeat in the final.
So it all came down to the girls on Sunday to fly the Tyrone flag.
Mairead Fox is no stranger to success at the Irish Nationals and was fancied strongly for the 19 and under title. She was determined to sign off on her magnificent underage career with the big one at 19 and under and she did not disappoint as the Loughmacrory star produced handball of the highest quality to clinch the title against the reigning All Ireland minor champion from Carrickmore, Clodagh Munroe.
Clodagh is a great player but Mairead was on fire on Sunday and was not going to be stopped as she produced serves and kills of the highest order to seal a 15-2, 15-9 victory in the title decider. It was a ruthless display from start to finish and although Clodagh made a really good contest of it in the second game, the result was never in doubt.
For Mairead the latest triumph means her tally of national titles at underage level has reached a stunning total of 15 which, along with her three world championship gold medals at 15 and under, makes her one of the most successful underage players in the sport’s history.
As Mairead moves on from the underage scene, her clubmate Laura Duff is enjoying a phenomenal run in juvenile competition since handball resumed.
Laura missed the opportunity to challenge for All Ireland U14 honours last year due to covid but instead of dwelling on it she went harder in training to try and achieve success at U16 level a year early and she is delivering in some style in 2022.
Laura went into her first Irish junior nationals with the Tyrone, Ulster and All Ireland U16 singles titles safely tucked away which made her the number one seed for the 15 and under Irish nationals trophy. And like Mairead Fox, she is showing an ability to step up to the plate when it matters as she survived two serious challenges in her semi final and final to add another major prize to her growing collection.
On Saturday night she had to see off a sustained challenge from U15 All Ireland champion Katie Jordan from Kilkenny before winning 15-14, 15-12 and on Sunday things were even tighter in a gripping encounter with local rival Caislin Treacy from Greencastle.
Laura somehow relinquished a 9-0 lead in the first game to lose 15-12 but she bounced back strongly to impressively take the second game 15-6.
Caislin is a fabulous young player who is putting her club on the map at national level and the 2022 She’s Ace winner must have thought she was on the brink of her biggest success when she carved out a 10-6 lead as the large crowd was treated to a marvellous contest between two young local girls giving everything they had.
Laura however is gaining a reputation for her refusal to accept defeat and she incredibly managed to pull off the five unanswered points she needed to snatch the most dramatic of victories.
It was a tough one for Caislin who didn’t deserve to lose in such a manner while for Laura the remarkable winning run continues.
Keeva Owens is another young Tyrone girl starting to make a name for herself on the national stage in juvenile handball and the Tyrone U14 football captain pulled off the biggest win off her career so far when she lifted the Irish 13 and under title on Sunday.
The talented Breacach player had already teamed up with Loughmacrory’s Lucy McCullagh to win the All Ireland U14 doubles title this year but she was up against the All Ireland U14 singles champion, Cork’s Amy Brosnan, in Sunday’s final.
The Cork star had defeated Lucy in a tightly contested semi final and the final proved even closer as Keeva and Amy both showed their quality to share the first two games and set up a thrilling tiebreaker.
The title initially appeared to be heading to Cork when Amy Brosnan went into a 10-8 lead but Keeva kept going and produced a strong finish to emerge as Irish Nationals 13 and under champion by the slimmest of winning margins.