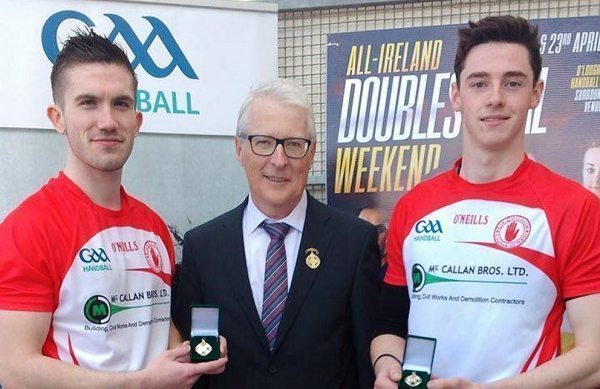 Following a hectic four week period of GAA Handball All Ireland Juvenile, Adult, Singles and Doubles Championship finals as well as Irish 40×20 Junior and Adult Nationals events, the Tyrone GAA Handball 40×20 Championships brought the final curtain down on a terrific campaign on Sunday.

All County leagues and championships have now been fully concluded with Tony McElduff and Mark McCartan winning the Tyrone Junior Doubles and Darragh Daly and Ryan Mullan claiming the Mens Senior Open Doubles 40×20 Championships, which had previously been put on hold due to Ulster and All Ireland events. 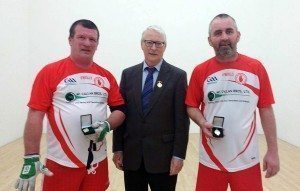 Those weekend finals in the Tyrone GAA Handball Junior and Senior Doubles Championships concluded the entire 40×20 league and championship season in the county, during which there were an impressive total of 845 matches played.

Overall there were 164 Juvenile players who competed across grades from Under 10 up to Under 17 in County Championships while 96 players competed in the 11 Adult Singles & Doubles Championships – giving an overall championship total of 260 players in 40×20 championship handball in 2016.

Meanwhile there were 98 players who competed in the 9 Tyrone GAA Handball Adult League competitions.

Overall it was a very successful 40×20 season for Tyrone GAA Handball and a record breaking one in terms of the achievements again on the court of play. In respect of the level of participation across the grades in the county leagues and championships was beginning to move back towards the numbers witnessed in the mid noughties again. 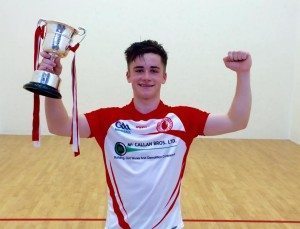 It was also great to see how finely balanced the spread of titles across the clubs continues to be – a very healthy aspect of the continued growth, competition and development of the sport in the county. From the 44 League and Championship titles up for grabs, Loughmacrory won 15, Breacach 13, Carrickmore 11, Pomeroy 3 and Ceapach 2. 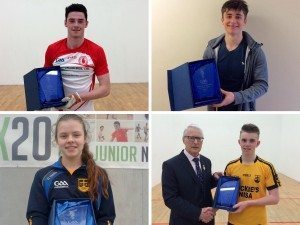 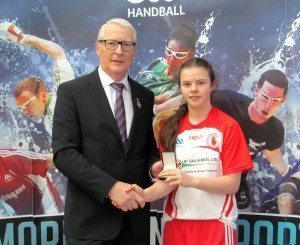 The Irish Junior 40×20 Nationals were staged in Galway and what transpired was another record for the Red Hand County as Tyrone captured four of the 8 Major Junior A Nationals titles on offer.

Mairead Fox (Girls 13 & Under), Antoin Fox (Boys 15 & Under), Sean Kerr (Boys 17 & Under) and Johnny Woods (Boys 19 & Under) all collected on Junior Nationals Finals day and significantly provided a clean sweep for the Boys in the major grades there at 15, 17 and 19 – a first ever for the County and only the second time in the history of the event that such an accomplishment manifested. 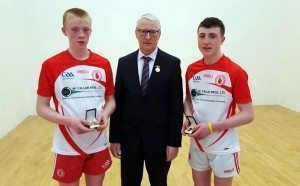 Click Here for Review of GAA Handball Adult All Ireland 40×20 Championship Finals
Paddy Grogan Memorial Handball Tournament
The now well established Paddy Grogan Memorial Handball Tournament, organised by the Carrickmore club, will go ahead this weekend as many of the top young stars in Irish Handball in the 40×20 court will converge on the club for the event. It promises to be a highly entertaining weekend of handball indeed, having proven so successful in the past. It is a great tribute to one of the great servants of Tyrone GAA Handball, in memory of one of the founding members of Carrickmore club and a former chairman of Tyrone GAA Handball, Paddy Grogan (RIP).
Click Here for the Carrickmore Handball Page with Updates on the Tournament
Ulster One Wall Handball Championships 2016
We are now into One Wall Handball (Wallball) season and the first major event will be the Ulster GAA Handball Official One Wall Championships, to be staged in Loughmacrory from 4th and 5th June 2016. Entry forms have now been distributed to all clubs in the county and must be returned with full entries by 25th May.
Lough Wallball Showdown 2016
The 2016 Loughmacrory Wallball Showdown will be stage in 2016 over the weekend of 12th to 14th August 2016. With 250+ entries in the opening two seasons of the event, it has now become well established as one of the foremost one wall tournaments on an excellent calendar of tournaments around Ireland. Full details of the event can be found on the link.
Click Here for Lough Wallball Showdown Event Page
Tyrone GAA Handball Wallball League Tournament
The annual Wallball League Tournament will see a change of format this season and will once again be organised by the Loughmacrory Club at the One Wall Arena in Loughmacrory, commencing in just over two weeks time.
Full details of entries will be out soon and players should note that the event will conclude pre One Wall Nationals in 2016.