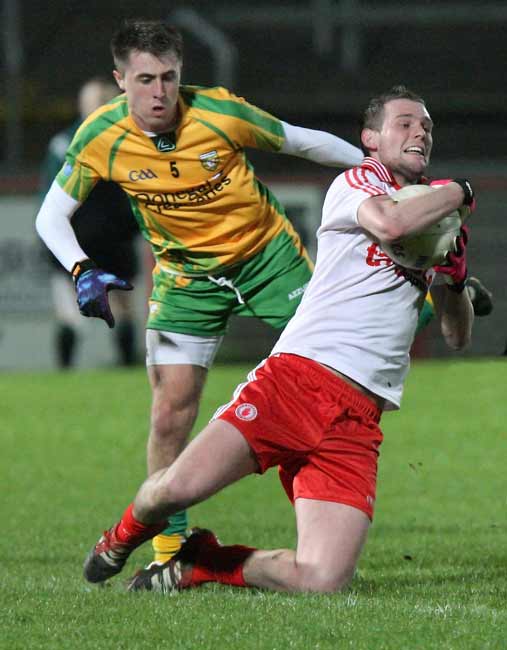 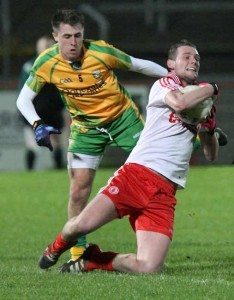 Tyrone will play Down in the semi final of the Cadbury’s Under 21 Ulster Championship following their win over a highly fancied Donegal side in Healy Park on Wednesday past. Having lost Ronan O’Neill to a knee injury Raymond Munroe’s side was weakened further with the news that Harry Og Conlon was unable to start due to a virus.

However it appeared that the fifteen chosen to start the game were keen to show that this bunch of players is not a one or two man team. Indeed that was the huge contrast and ultimately the difference between the sides on Wednesday night. Every Tyrone player worked his socks off chasing, supporting, tackling and covering. No man embodied the spirit of the team more than Sean Warnock who had a superb game at midfield for Tyrone. The Greencastle student covered every inch of Healy Park before being replaced with six minutes left having delivered an excellent display which included a fine point in the first half.

Overall Tyrone played more like a team and were not dependent on one or two big name players to do the work for them. Every man played his part right from Darragh Mc Anenly in goals to John Mc Cullagh in corner forward. However this was in no way a perfect performance and manager Raymond Munroe will no doubt have noticed one or two areas his players can improve upon.

At the end of the day scores win matches and right corner forward Darren Mc Curry hit five excellent scores on the night including one wonder score in the first half. He won a ball in a very tight situation, seemed to spin in the same movement and then unleashed a super shot while under pressure which sailed over just inside the right hand post. It extended Tyrone’s lead and as half time approached but typified the spirit and determination of the side to do whatever it took to ensure it was Tyrone who were going through to the last four.

This win will have given the team a real shot in the arm as they prepare to take on a Down side that is highly fancied to do well this year. When these sides met last year in the competition it took three games to separate them which many believe ultimately cost Tyrone the title. While we would all love another highly entertaining and exciting game, perhaps a straight forward win would be enough to satisfy the team and their supporters this time around.