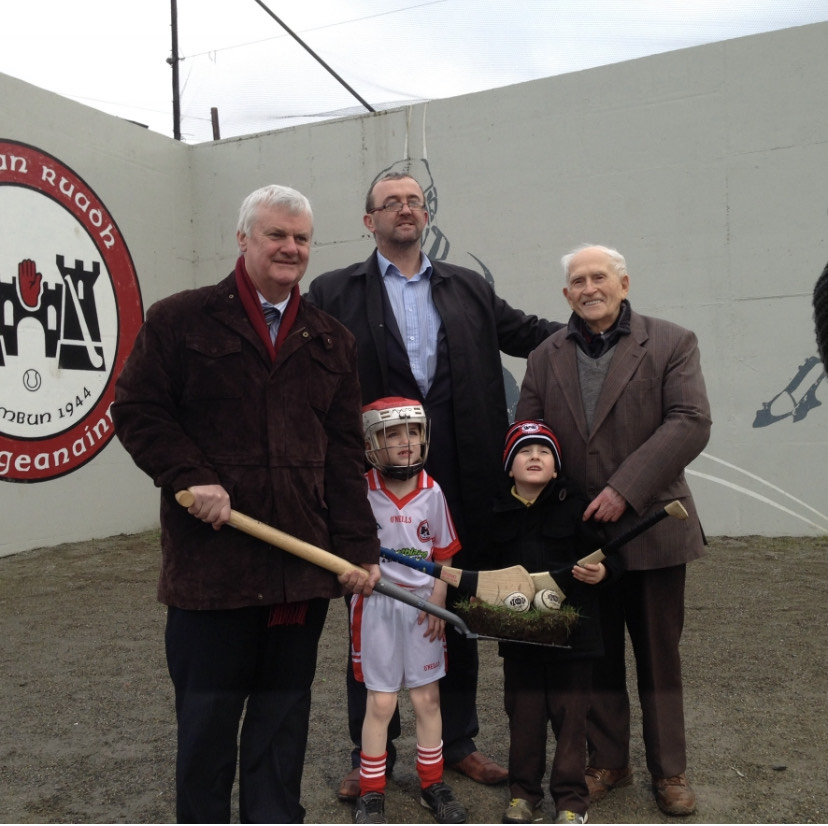 It is was with profound sadness that the Officers, Committee, players and members of Eoghan Ruadh Hurling Club, Dungannon learned of the passing of their Uachtarán Eamonn Ó Doibhlín, (Teddy Devlin) on Tuesday 18th May.

Teddy served Eoghan Ruadh from boyhood as founder member of the club, as a player, referee and office bearer, holding every major office in the club as well as at County and Provincial Hurling Board level. He espoused and promoted our national game in his beloved Dungannon and throughout Tyrone and Ulster. Quite simply, the Eoghan Ruadh club would not be the club it is today without the foundations laid by Teddy Devlin, his brothers John, Michael, Paddy and Noel and Teddy’s Hurling colleagues from those early generations.

They shared a passion for all things Gaelic but that passion arguably found its greatest expression in their shared love of the game of Hurling.  The early beginnings were spawned in the mid-1940s with the club being formally constituted in 1946. Those early generations laid the foundations and Teddy was a constant thread over the next 75 years. His unstinting dedication to Hurling, Eoghan Ruadh and all things Gaelic never waned through bad times and good. His abiding legacy was an emphasis on the development of youth teams. In Teddy’s view, it didn’t matter how well, or bad your senior team was, a club needed to continually attract and develop young hurlers. Countless scores of Eoghan Ruadh players past and present answered that call and today Eoghan Ruadh fields teams from under-6 right up to senior, indeed this year the club is fielding two senior teams. After his playing days he took to administration and refereeing.  He’d go on to referee at All Ireland level even taking charge or umpiring at games in Croke Park.

He had other interests as well. A Gold Pioneer holder, he was a fluent Gaelgóir and lifelong supporter and member of the Gaelic League and An Craobh Ruadh. He played his part too in the national struggle and was incarcerated in the mid-1950s for his political beliefs. But this only hardened his resolve and he was never far from lending his practical support in support of the Ireland of his and fellow nationalists’ dreams whether for the struggle for Civil Rights or the plight of political prisoners. Greyhounds were another great passion and he and his late wife Sally (née Kane) bred and raced greyhounds all over Ireland. He was a shrewd judge of any activity where a bet could be placed, having spent a lifetime setting the odds in McQuaid’s Bookmakers in Babe’s Entry off Irish Street where he worked until retirement. Indeed he had an uncanny knack of calling the likely winning margin in any game.

We remember him with deep affection at this sad time and extend our deepest condolences to his brothers Paddy (USA), Noel, sisters Ann and Mary, all his nieces and nephews and their children too, all of whom shared Teddy’s passion for Hurling and Gaelic culture. They too have built and continue to build on the legacy that Teddy has left us and his native Dún Geanainn. Ar dheis Dé go raibh a anam uasal.