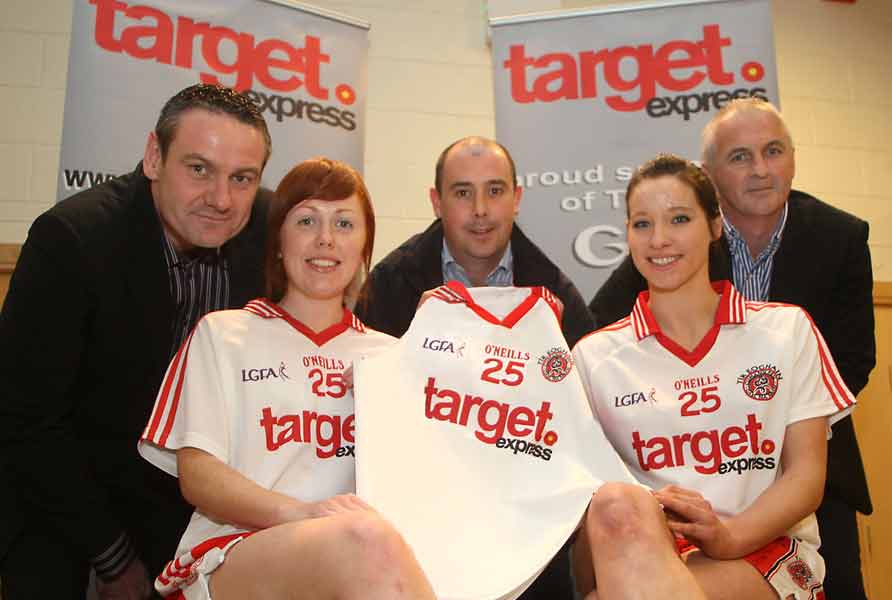 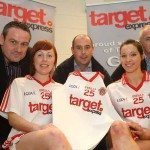 History has been made in Tyrone Gaelic games with the confirmation of a major sponsorship deal between Target Express and the Tyrone Ladies GFA. This leaves Target now as the sponsors of all ladies inter county teams, the men’s adult and underage teams, as well as the hurlers and handballers of the county, making their link up with the ladies a virtual closed circle of support for Tyrone Gaelic games.
The sponsorship agreement that also involves kit supplier O’Neill’s International will see all Tyrone Ladies teams from U14 to Senior wearing a new style jersey emblazoned with the Target Express livery.  Speaking at the launch at the superb Beragh Red Knights complex on Friday county Ladies Chairman Martin Conway expressed his delight at the deal and explained the reasons behind the design, “The new jersey retains the “classic” Tyrone GAA design as used by the current Men’s teams and incorporates both the Tyrone Ladies GFA and the new Ladies Gaelic Football Association logos.  It was felt that keeping the design the same as the Men’s teams would help encourage the view of Tyrone as being one GAA family as we strive for increased integration of our games. As well, both the Ladies County Board and the McBrien family owners of Target Express are conscious of the financial pressures that families are under and this will minimise the need for totally different shirts and leisure wear when supporting all the County teams”.
Tyrone’s ladies county board worked closely with Ciaran McLaughlin, the Tyrone county Chair, to seal the deal with the McBrien family while Kieran Kennedy of O’Neill’s international sportswear was a massive help in getting the design just right. Ladies Chair Mr Conway heaped praise on those involved, “The support and assistance of Ciaran McLaughlin has been tremendous while Kieran Kennedy’s commitment to the GAA in Tyrone can’t be over emphasised. We can really have “one identity” in our Gaelic games family in Tyrone now. Targets support is superb and eases the financial strain of fielding our county sides in leagues and championships in the coming years”
Target Express director Paul McBrien was delighted to be involved now with almost all aspects of Gaelic games in Tyrone, “ We made a commitment last year to Tyrone and I am delighted that in the past six months we have added the handballers and now the ladies GFA in the county. The GAA family in the O’Neill County is strong and I hope our contribution can help Tyrone at all levels achieve the highest honours available. The senior ladies went close last year, we hope that all Ireland “Target” can be achieved this year”
The kit supplied by O’Neills, who are of course major employers in the Strabane area, is produced locally by local people, Kieran Kennedy also happy to be involved, “We are delighted to play our part in this relationship with the Tyrone Ladies GFA. We are a local company with strong community links and that includes men, women, boys and girls. It’s natural for us to be involved with all aspects of Gaelic games in the county”
Tyrone’s deal is the first of its kind in the history of Tyrone GAA. The county has enjoyed support at all levels in the past and the support of previous sponsors was acknowledged at Friday’s launch attended by representatives of the sponsors Target Express and suppliers O’Neill’s, Tyrone Chairman Ciaran McLaughlin and county board officials, County and Provincial ladies football officials, Tyrone’s inter county management teams with several players from the county squads and representatives from the Tyrone clubs.
The evening concluded with a light supper supplied by Farleys of Beragh.