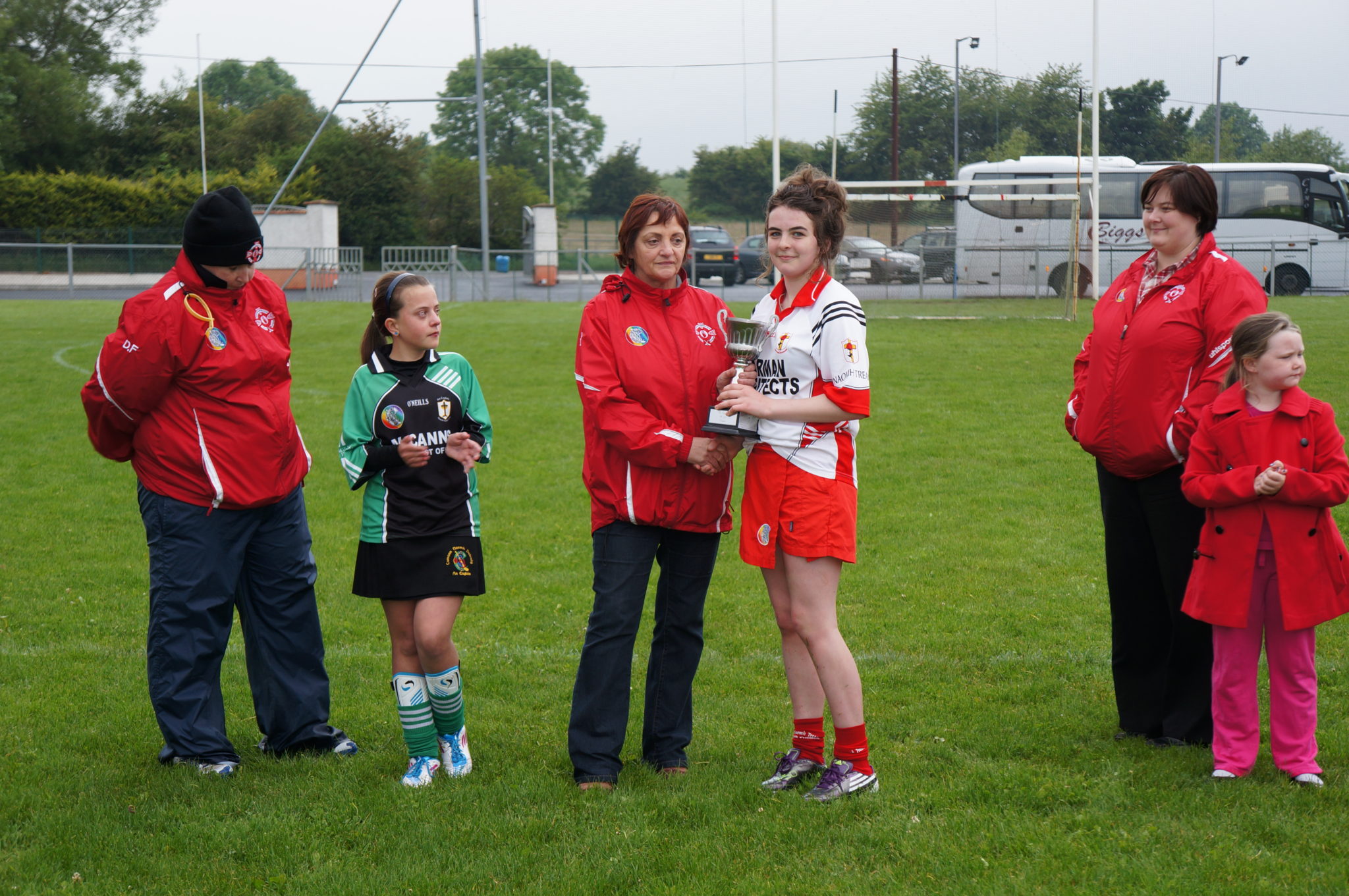 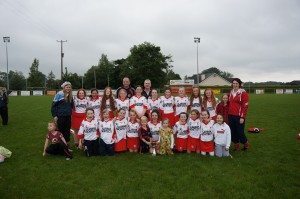 Dungannon and Eglish shared the honours in a busy week for the young camogs in Tyrone. The week started with an exciting Post Primary Championship final in Moy. The thunder and heavy rain earlier in the day held off just long enough to see an exhibition of skill shown by the youngest players in our County. The supporters were out on force from both clubs that saw Eglish dominate a second half to lift the Bridie McMenanin shield. Dungannon held a half time lead but were unable to withstand a strong Eglish side. Shannon McCaffery was the proud grand daughter who presented the shield to a thrilled Eglish captain Catherine Donnelly.

The under 14’s took centre stage on Thursday evening in Brocach when again Dungannon and Eglish were to come face to face in a Tyrone Championship decider. The two teams knew each other well as they met in the Féile final but it was Dungannon who came out on top with strong and well organised team display. Eglish took an early lead in the game but Dungannon soon got into their stride and they ran out eventual winners. The game was played in great spirit and it was a joy to see such talent and good sporting behaviour from both sides. Ursula Jordan presented the championship cup to a proud captain Ellie Donnelly. Tyrone camogie would like to thank Eileen McArdle form Brocach and the staff at Moy for their help on the evenings and for the use of their excellent facilities. The managers and mentors from both clubs must be congratulated for the way the players conducted themselves both on and off the field. 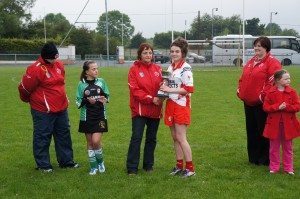 The weather was not so kind and the Players Lifestyle day planned for Eglish on Saturday had to be cancelled. It will be rearranged for early July and all clubs are reminded the importance of such an event. It is geared towards the 15 to 18 year old age group. Michael Glover will be taking the session which will be approximately six hours long and will cover all aspects of camogie. There will also be county players in attendance to help out so it will surely be an exciting experience for all involved.

Derrylaughan will no doubt live up to the hype that always surrounds a Go Games Blitz that will be held on Saturday 30th June. The day will start at 9:15 am and end at 11:30 am and all clubs are aware that the u10’s, u8’s and u6’s can showcase their talent against all Tyrone clubs. All teams are expected to get three or four games and all parents are encouraged to attend the morning session. Can all clubs please contact Bronagh Carney who will be co-ordinating the event to enrol their teams. 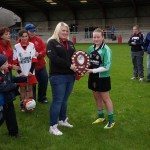 It will be the senior team that will take centre stage on Saturday evening as they welcome Dublin in Edendork scheduled for a 6:00pm start. The game is the first of five fixtures that the seniors will play in their attempt to win a championship title in 2012. Dublin are the All Ireland League Division 4 champions and Tyrone are expecting a tough match. It is hoped that there will be a lot of supporters on the day for the home venue. The Edendork pitch is always in tip top condition and Tyrone Camogie is privileged to have the tie at such a venue.

All the players and clubs within Tyrone would like to wish the outgoing Senior manager Chris Heaney all the best for the future as he embarks on a new life in Australia. Chris will be joining his family who are settling into their new abode in a warmer and sunnier climate than we are used to here in Tyrone. Chris has this season instilled a winning mentality and belief into the team and we are all grateful for his input. We do hope the only thing you’ll miss about Tyrone Camogie Chris are those awful pictures on Facebook! 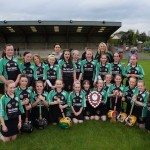