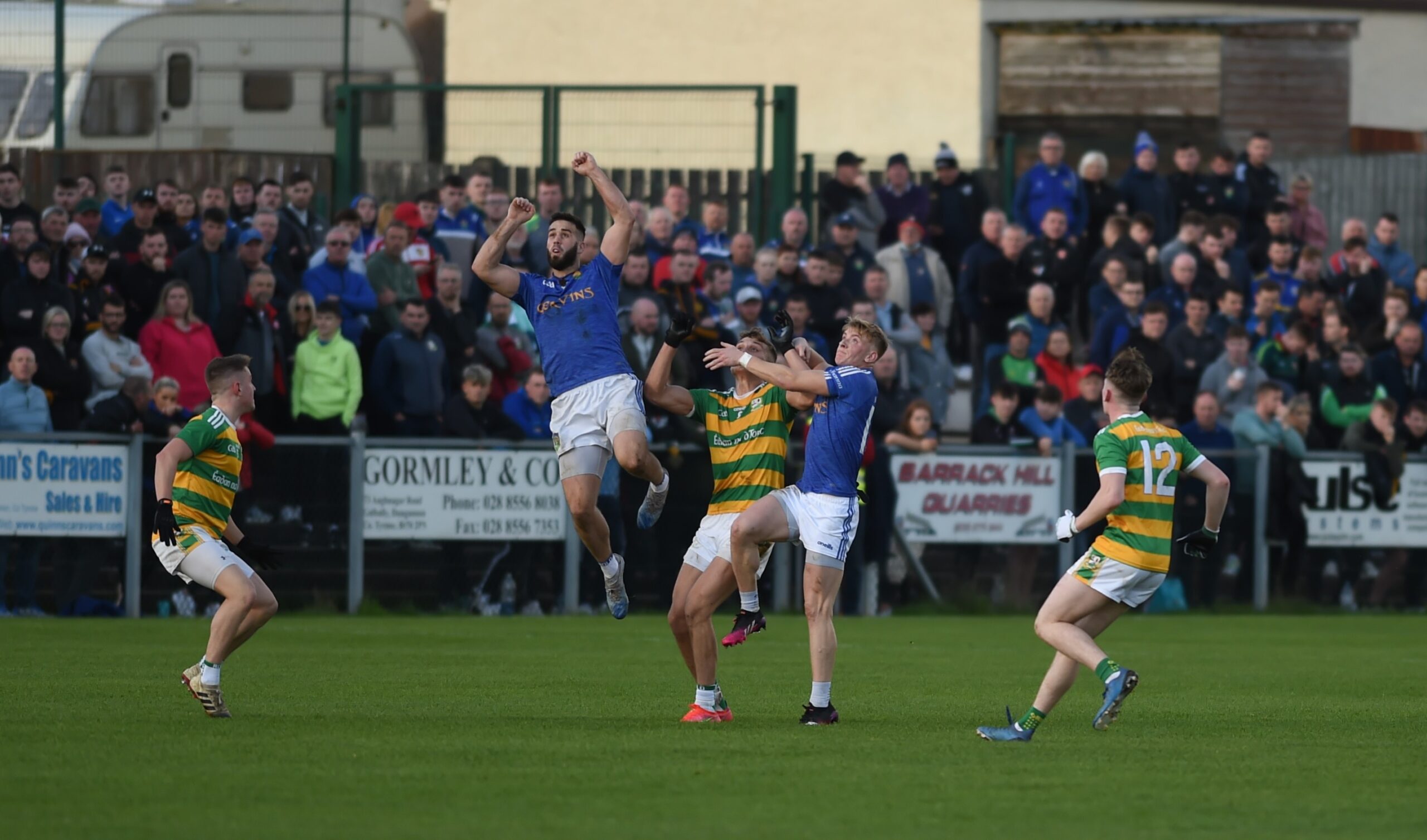 Coalisland’s refusal to accept defeat and throw in the towel somehow saw them rescue what looked an impossible situation to beat Edendork in the LCC senior championship at Pearse Park on Saturday afternoon.

It’s fair to say that St.Malachys were the better side for large spells of the contest and they will be wondering how they left it behind them. They led by eight points at one stage in the first half and even with less than ten minutes of normal time left on the clock they were still seven in front. A Peter Herron goal gave the Fianna a glimmer of hope before Stephen McNally capped an unbelievable comeback with a fourth major three minutes into injury time to set up a mouth-watering last eight clash with Carrickmore.

With five Allstar nominees on the field this was always going to be a quality game and it certainly didn’t disappoint. The sides shared the opening four points with Bailey Leonard and Niall Morgan among the scorers before Edendork got on top. Darren McCurry got in for an opportunist 17th minute goal and that was followed by a major from James Fearon. Herron flicked home a Fianna goal but it was Edendork who led 2-6 to 1-4 at the break.

Cormac O’Hagan and McCurry swapped points from frees on the restart as did Sean Corr and Morgan before a Jason Carberry goal left it 2-8 to 2-6. Morgan knocked over a “45” and the same player then picked out an outstanding pass to Fearon who finished in style to the roof of the net. It looked all over bar the shouting but Coalisland had other ideas. Herron got his second and his side’s third goal before McNally drove the ball into the bottom right hand corner of the net. Edendork were shell shocked and Corr completed an amazing comeback with a successful free with the last kick of the game.

A late injury time goal from defender Niall Allison helped propel Carrickmore into the quarter finals of the LCC senior championship after a gripping encounter with Omagh at Loughmacrory on Saturday afternoon.

It was a contest that the St.Colmcilles looked to have complete control of when they led 2-5 to 0-2 at the first water break but Omagh had trimmed the deficit to five by the break. In a pulsating encounter the St.Endas fought back to level terms in the second period before Carrickmore edged back in front. Extra time was looking likely when Allison popped up to take a pass from fellow defender Sean Loughran and crash the ball to the back of the net.

The game was less than a minute old when Cormac Munroe fired in a goal and points from Ciaran and Caolan Daly were added before Conor Meyler opened Omagh’s account. Carrickmore though were in full flow and a well worked move resulted in a 11th minute goal from their Captain Rory Donnelly. After the water break Ronan O’Neill got in for a well taken goal and he tagged on a point as did Conor O’Donnell and Jason McAnulla. Carrickmore stayed in front though thanks to points from Loughran, Allison and Fullerton.

Omagh showed their intent in the third quarter as they outscored their opponents 0-6 to 0-1 to draw level, Barry Tierney with a brace and O’Donnell, McAnulla and Oisin Miller on target as well. A Ciaran Daly free put Carrickmore back in front but with two minutes of normal time left to play O’Donnell sent over a brilliant equaliser. Extra time looked likely at that stage before Caolan Daly converted a free going into time added on. Three minutes into injury time Carrickmore keeper Jack McCallan made a crucial save to deny Miller a goal and moments later the net did bulge at the other end of the field to secure a Carrickmore victory.