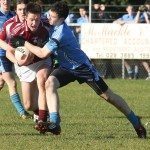 St Mary’s were deservedly ahead by 1-4 to 0-4 at the break, thanks to an impressive first half tally of 1-2 from Aaron Devlin. The Magherafelt dangerman had also been denied by a great save from Ryan Brolly before hitting the net to put the South Derry side in a great position at the halfway stage.

Managaed by Loughmacrory man, John McElholm, St Mary’s were really fired up for this encounter and produced a great display to upset the odds.

Omagh managed four points in the first half courtesy of Ronan O’Neill, Brendan Donaghy, Ryan Mayse and John McCullagh and looked as if they were growing in stature when two more points from O’Neill left them trailing by 1-5 to 0-6 going into the final quarter.

However, the CBS could only muster one further point as St Mary’s finished the match in tremendous style. Conor Kearns kicked four second half points for the South Derry outfit as they produced an impressive late flourish, with Aaron Devlin and defender Martin Breen also on target.

Omagh were reduced to fourteen men when Niall Donaghy was ordered off in the final minute, before Magherafelt substitute Christopher Mellon put the seal on his side’s victory when he palmed the ball to the Omagh net in injury time, completing a miserable afternoon for the highly fancied Tyrone students.