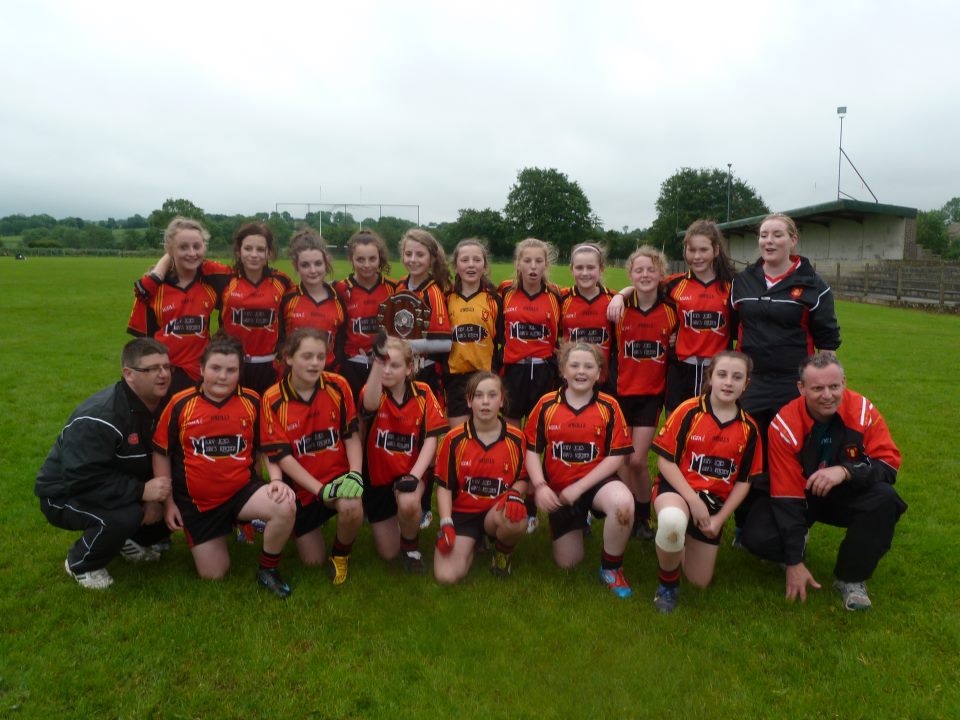 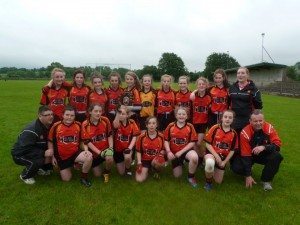 On Tuesday 3rd July Mna Na Deirge Under 14’s completed the grade 2 league and championship double when they defeated Cookstown Fr Rocks after a thrilling extra time victory in Beragh. With the two best teams in the section meeting in the league final it was no surprise that the game went to extra time. Showing their familiar grit and determination the Derg girls finished up winners on a scoreline of 5-11 to 5-06
There was little between the sides in the first half with the Derg girls just shading it on a scoreline of 1-02 to 0-04. Mna Na Deirge were unusually quick out of the blocks in the first period but a series of wides early on began to put pressure on their forwards. In defence Roisin Harper and Erin Duffy coped well with a very talented Fr Rocks forward line. Sophie Ramsey was again outstanding in the half back line breaking up many Cookstown attacks and when called upon counter attacking with skill and power. In the forward line Emma Laird and Karen Coyle showed well and their link play with other team members resulted in Mna Na Deirge scores. At times when it seemed the Derg girls were starting to take control of the game Fr Rocks continued to come back at them. Fr Rocks were showing more hunger than their counterparts and were unlucky to end the half trailing by a point. Scorers in the first half for Mna Na Deirge were Emma Laird (1-0) Roisin Devlin (0-2) and Chloe White (0-1).
The second half began with Fr Rocks carrying on where they had finished in the first half. Their direct style of play, pumping long high balls into their full forwards paid dividends right away as they scored a goal within five minutes. Maria McLaughlin was as determined as ever in goals and on a few occasions was called upon to make some crucial blocks. In front of Maria and starting in her first final was Anna Semple who after a nervous first half settled down and began to get the better of her opponent. Unfortunately injury forced Anna off midway through the second half for her to be replaced by the dependable Ciara Porter. The high ball tactic was proving fruitful as the Cookstown girls were able to add two more goals in the second period as a result of high balls into the oppositions square. However, the Derg girls stuck to their short passing, running support game and kept creating chances which began to pay dividends. Roisin Devlin and Chloe White were outstanding in midfield for the eventual winners.
The second half saw the Derg forwards come more into the game with Niamh McLaughlin and Anna Harper becoming increasingly dangerous. They were well supported by their half-forward colleague, Casey McHugh. Further scores in the second period from Roisin Devlin (1-0) Aine McGrath (1-0) Niamh McLaughlin (0-01) and Sophie Ramsey (0-01) left Mna Na Deirge with a total of 3-06 after the end of normal time. Aine McGrath was a powerhouse at full back and her goal was a particularly excellent individual effort after running nearly three quarters the length of the pitch. Encouraging their team-mates from the side-line Emma Logue and Darerca Lynch epitomised the team effort that this season has been for this bunch of girls.
The final whistle at the end of normal time was controversial. Many spectators and team officials had the Derg girls ahead by a point but the referee had the scores level. This sense of injustice combined with superior fitness saw Mna Na Deirge add a further 2-05 to their score compared with 2 goals scored by Fr Rocks. Scorers in extra-time for Mna Na Deirge were Casey McHugh (1-0) Anna Harper (1-0) Roisin Devlin (0-2) Chloe White (0-02) Sophie Ramsey (0-01) and Aine McGrath (0-01).
There were tremendous scenes of delight at the end when team captain Anna Harper received the league trophy from Tyrone Ladies Fixtrues Secretary Aisling Doyle. The incessant falling rain could not dampen the high spirits with the Mna Na Deirge camp as they began the journey home with a second piece of silverware for the ever expanding trophy cabinet out at Marius McHugh Park. 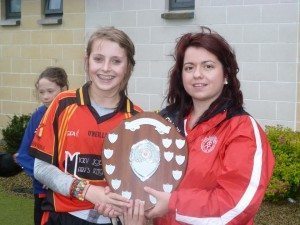