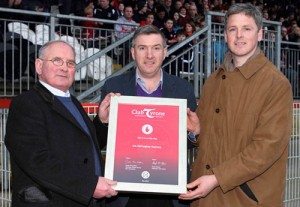 Francis and Michael McGirr, father and brother of the late Paul RIP, representing the McGirr family (Garvaghey and Dromore), who became the 200th member of the Club Tyrone Garvaghey Patrons Scheme this afternoon during half time in the Tyrone v Derry league match.   They are joined with Club Tyrone chairman, Hugh Mc Aleer. Garvaghey Patrons pledge £5000 over five years to the Tyrone GAA Garvaghey Project.
Tyrone GAA is indebted to the members of Club Tyrone and the Garvaghey Patrons who have so generously put their hands in their pocket while there remains a total lack of support from those who should be Garvaghey’s core-funders, Sport NI and DCAL.  Garvaghey is only four months from completion and will be formally opened (on 28 September 2013, ten years to the day from Tyrone’s first Senior All-Ireland success).