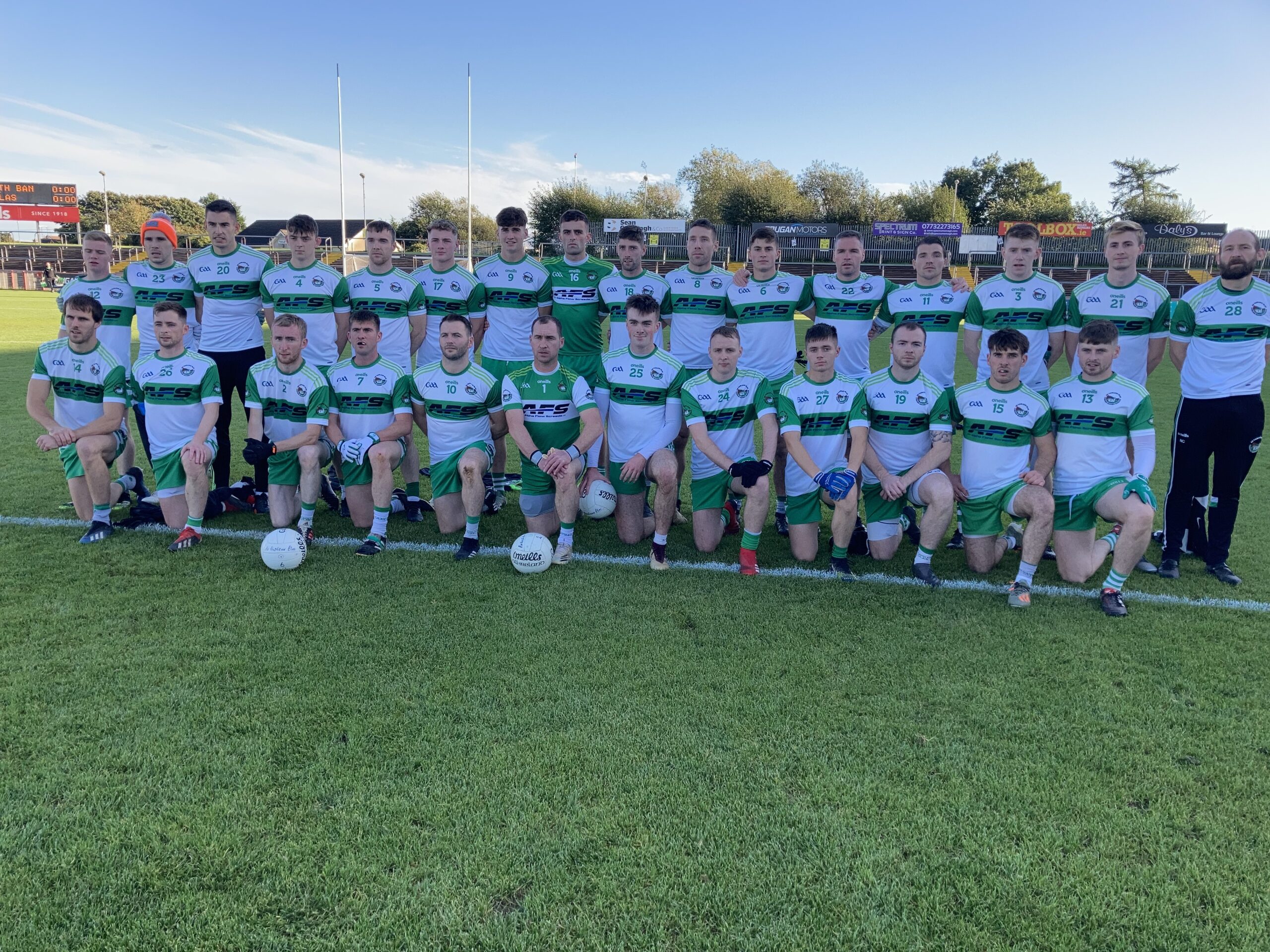 There were wins in the LCC Intermediate Championship on Saturday for Beragh, Gortin, Greencastle and Owen Roes.

The early afternoon double header at Loughmacrory saw Beragh, with Jack Campbell in superb goal scoring form, ease past Naomh Eoghan while Gortin defeated Tattyreagh thanks to a late, late winner from the boot of Brian Mc Garvey.

Greencastle looked very sharp in their evening fixture at O’Neills Healy Park and had little trouble putting Strabane to the sword. Cahir Mc Cullagh and Sean Fox caused all sorts of problems for the Sigersons rearguard. Owen Roes and Aghyaran served up a highly entertaining contest that saw the Glenmornan lads hold out for a deserved win with Peter Kirk and Conal Mc Cormack among the stars for the winners.

Beragh’s forwards were on top form from early on against Naomh Eoghan and an early goal from Jack Campbell gave the Red Knights the perfect start. Aidan Mc Sorley (2) and Niall Mayse pointed to get their side back in the game but Campbell plundered three further goals to put them in total control. Oisin Donnelly and Oran Treacy added points for Beragh while Aidan Mc Sorley took his first half tally to five points but with the Red Knights in total control the half time score read 4-6 to 0-6 in favour of Beragh.

Mc Sorley hit the net for Naomh Eoghan just after the break but Beragh continued to dominate  and further goals from Campbell, his fifth, and two from substitute Mattie Mc Sorley eased them to a comfortable 7-12 to 2-10 win.

There was little between Tattyreagh and Gortin throughout the game as Gortin recovered from a slow start to close the gap to a single point at the break. A well crafted goal from the boot of Sean Og Mc Aleer helped send the sides in at half time with Tattyreagh leading 0-8 to 1-4. Colin Mimnagh, Peadar Mullan and Robert Porter were among the first half points for the Tatts.

Daire Mc Swiggan tied the game early in the second half but a brace of points from Robert Porter put Tattyreagh one up with less than five minutes remaining. Gortin dug deep and Peter Keenan struck for the equaliser before that superb finish from Brian Mc Garvey right on full time sealed the win for Gortin on a final score of 1-9 to 0-11.

Greencastle produced a fine all round team performance to easily see off the challenge of Strabane on Saturday evening. Cahir Mc Cullagh gave Sean Teague’s side the perfect start with a goal after fifteen seconds. Strabane hit two points from Oran Mc Grath but the Sigersons struggled from early on with the pace and hunger of their opponents. Peter Teague and Daniel Tuohey combined for Greencastle’s second goal while further points from Sean Fox, Ryan Gumley and Paddy Mc Illhatton eased them 2-6 to 0-3 in front at the break. The pace did not relent after the break as Cahir Mc Cullagh, Ryan Gumley, Sean Warnock and Mark Carson added to their tally. Sigersons produced a flurry of scores late in the game from Martin Mongan, Danny Mc Bride and Mark Mc Adams but a third Greencastle major from the boot of Shane Mc Cullagh and a further point helped seal a 3-15 to 0-7 win.

The final game of the evening was a real old fashioned championship game played with pace and determination. An early goal from Eoghan Mc Hugh gave Aghyaran the perfect start but resolute defending from a very well organised Owen Roes rearguard ensured this would be no cakewalk for their opponents. Peter Kirk, Stephen Harper and Conal Mc Cormack hit points to narrow the gap to one before Cathal Mc Shane pointed on twenty five minutes to level the game. It may have been low scoring fare but it was compelling viewing with some superb defensive play. Stephen Kelly was black carded just before the break and Eoghan Mc Hugh and Tony Devine swapped scores in added time to send the teams in tied at the break.

Owen Roes looked the stronger side and coped easily with the temporary loss of their full back. Mc Shane set Kirk up for their first goal but Aghyaran responded with a shot off the post and a point from an Eoghan Mc Hugh mark. Minutes later Michael Dooher took a pass from Seamus Dooher to score his side’s second goal of the game. Ricki Devine and Cathal Mc Shane extended the Owen Roes lead to eight points by the second water break and Aghyaran looked in major bother. They then threw off the shackles and went for broke. A Ciaran Mc Glinchey goal and points from Paddy Mc Nulty and Ronan Mc Hugh set us up for a grandstand finish but Owen Roes held on for the win on a final score of 2-9 to 2-7.