Tonight’s County Convention saw the election of Greencastle manager Sean Teague as County Coaching Officer for 2011.  The former county captain and centre back defeated Micky Mc Golderick in one of the few positions that required a contest at tonight’s convention in Donaghmore. One other change on the county board saw Liam Nelis defeat popular Aghaloo man Cuthbert Donnelly for the position of Ard Comhairle delegate following the completion of Brendan Harkin’s five year term in that post. The Killyclogher man now takes up the post of Hurling Officer and returns to the County Board in this new position but one which is very close to the former County Chairman’s heart. 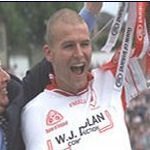