St.Ciarans Ballygawley retained the Tyrone U14 Vocational schools title when they were worthy nine point winners over a battling Holy Trinity Cookstown side at Rock on Wednesday afternoon. The winners laid the foundations for their victory in the first half as they established a 2-5 to 0-2 lead with Jody McGlone and Conor Mullen getting their goals and Conor Kelly and Adam Arthurs hitting the points between them, half back Owen Kelly having given Holy Trinity the lead in the third minute. Two minutes into the second half McGlone found the net again and it was a long way back for Holy Trinity. Christopher McNicholl, David Mulgrew and Michael O’Neill had Holy Trinity points but St.Ciarans didn’t panic with Arthurs scoring a brace as they ran out comfortable winners on a 3-7 to0-7 score line. Shea Hurson, Caolan Boyle, Seamus Mulgrew, Nathan Grimes, Conal Monaghan, Arthurs, Kelly and McGlone all played well for the winners while Holy Trinity were best served by Owen Kelly, McNicholl, Enda McAleer and Mulgrew. 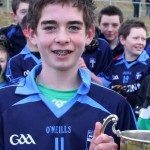