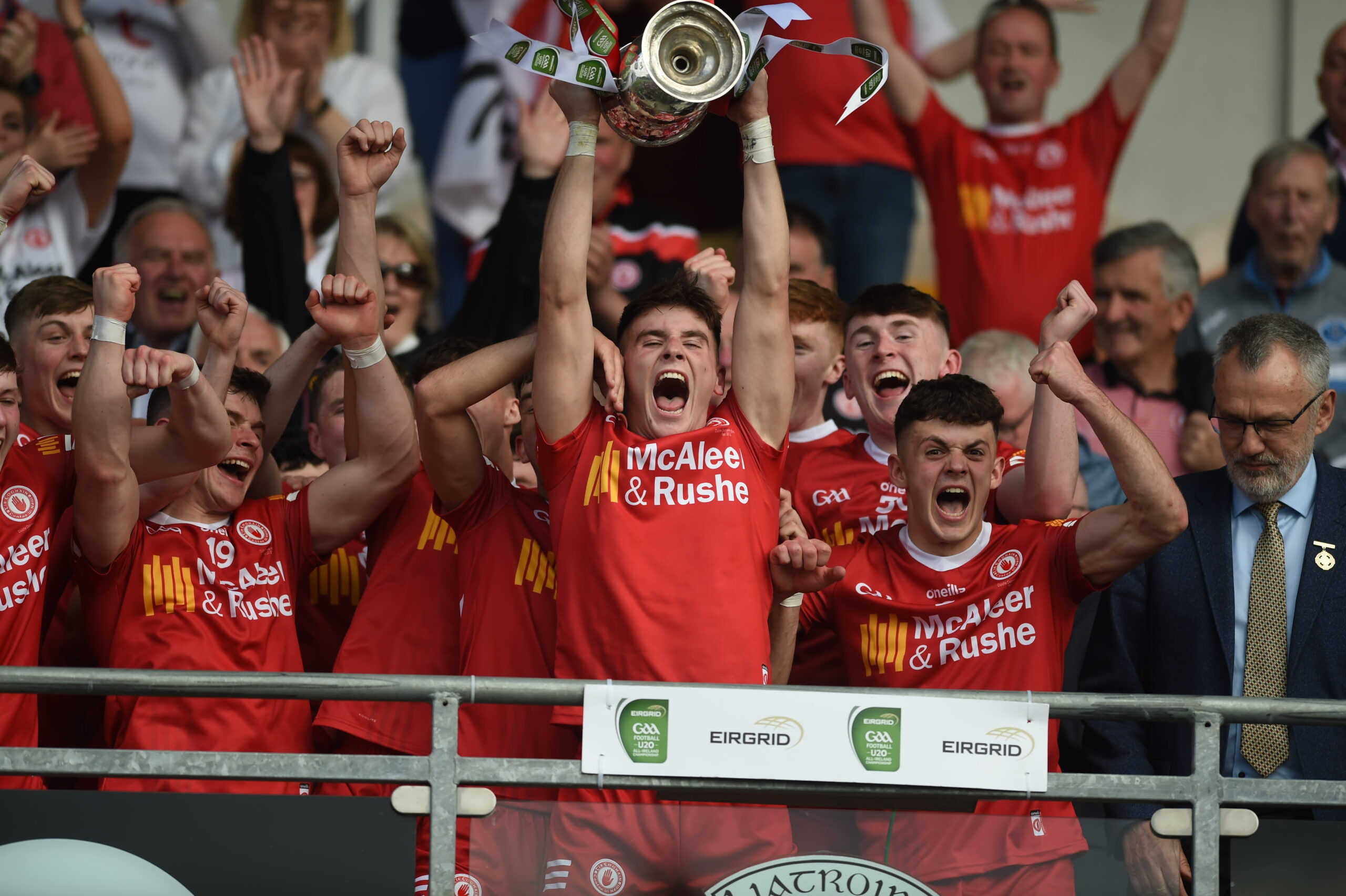 Having won five All Ireland titles at U21 level Tyrone captured their first at the U20 grade when they produced a superb display to overcome Kildare in the decider at Carrick-on-Shannon on Saturday evening.

It was a contest that they always looked to be in control off and in fact only once in the first half did they trail briefly. Every player in a Red Hands jersey played their part in a great success with Ruairi Canavan man of the match with a superb 1-7 to his name. Not far behind him was team Captain Niall Devlin who led by example and contributed three brilliant points into the bargain all coming at crucial stages in the game. The players and management team deserve immense credit for going all the way and nobody can deny that they are worthy champions.The game got off to an unbelievable start when Ciaran Bogue played the ball into Conor Cush who quickly offloaded to Canavan and he did the rest as he burst past a couple of challenges before unleashing an unstoppable shot to the roof of the Kildare net. Undaunted by that setback the Leinster champions hit back straight away when they came down the field for Shane Farrell to square the ball for Daniel Lynam to palm the ball home from close range.

Points from Bogue and Dan Muldoon edged Tyrone in front but back came Kildare through scores from Niall O’Regan, Dean O’Donoghue and Eoin Bagnall to give them the lead by the 18th minute. That proved to be the only time that they would lead though as Tyrone got on top despite playing against the wind. Cush and Canavan took great scores from opposite wings before half backs James Donaghy and Captain Niall Devlin got in on the act as they established a 1-9 to 1-5 interval advantage.

Kildare missed a few chances on the restart but Canavan steadied the ship with a brilliant score from out on the right wing. Bagnall responded when he cut in from the left wing to split the posts before Devlin weighed in with his third score of the contest, another superb effort from distance.Tommy Gill and Ruairi McHugh exchanged points before substitute Darragh Swords reduced the deficit to four points with ten minutes left on the clock. The game was still in the melting pot at this stage but Tyrone upped the tempo and moved to another level with two excellent long range frees from the boot of Canavan.

Bagnall responded with a free but Tyrone had the bit between their teeth with Michael McGleenan and substitute Gavin Potter both on target. Midfielder Luke Killian pointed for Kildare but the goal that they badly needed to reignite their challenge never looked likely. Canavan hit an inspirational score from fifty metres out and he added another with his weaker left foot. Killian and Adam Fanning got Kildare scores but it was Tyrone’s day with Canavan hitting another brace and substitutes Gavin Potter and Luke Donnelly also on target as they took the silverware.