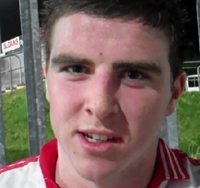 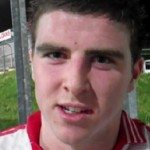 Clonoe’s Conor McAliskey continues to set a cracking pace at the top of the Begleys Sports Division one league scoring charts. After six rounds he still remains twelve points clear of the field although there is a change in second place with last season’s winner Shane Mulgrew leapfrogging Paddy McNiece. Darren McCurry has moved up to fourth place swapping with Ardboe’s Michael Hagan with Tommy Canavan and Conor O’Donnell next in line. Former Tyrone attacker Leo Meenan comes into the top ten as does the top scoring midfielder in the county Plunkett Kane. Caolan Daly’s early goal against Eglish last weekend set Carrickmore on their way to victory and it also helped ensure that he keeps his place on the leader board.