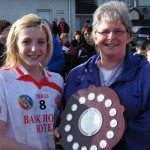 Tyrone lifted the Ulster U16 Camogie title on Saturday afternoon at Moortown when they had a comfortable win over Monaghan. Played in adverse conditions Tyrone dominated for much of the game with some great play from Maggie Hagan, Maireád Quinn, Niamh McNulty, Maebh McGleenan and Áine Donnelly. Tyrone’s first score came from Niamh Coney with a great goal, followed by a point from Áine Donnelly Maebh McGleenan was to register her first score with a point from a 30m free. Some great saves from the Monaghan goalie Áoife Finnegan stopped Tyrone from going further ahead in the first half. Tyrone were to edge further ahead with another goal from Niamh McNulty.  Monaghan were to finish the half with a point form Ailbhe Boyle. Half time score Tyrone 2gls 3pts Monaghan 0gls 1pt. 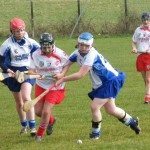 The second half proved to be very tight marking with both teams contesting every ball, both teams were left scoreless for long periods of the game until Pauline Barker slotted in a goal for Tyrone, this seemed to spur Tyrone on but a lot of missed scoring changes went astray. Maggie Hagan again led the Tyrone attacks with great skill and along with teammates Áine Donnelly and Niamh McNulty put 3 more points on the scoreboard. Tyrone kept Monaghan scoreless in the second half but there was some fine play from Monaghan’s Elaine McKernan Emma Forde and Áoife Finnegan.
Tyrone now go on to play Derry on the 12th March in the Ulster Cup Semi-final
Tyrone captain Áine Donnelly was presented with the shield by Ulster Chairperson Catherine O’Hara 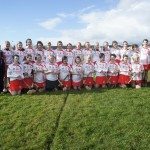