Carrickmore’s hopes of wining the Ulster IHC crown ended in disappointing fashion, at Casement Park on Sunday, when a late St John’s rally handed the Whiterock men a three-point victory. 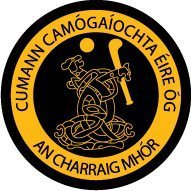 The Johnnies may have been overwhelming favourites to win the title, but they didn’t get things all their own way as Damian Maguire, Sean Paul Begley and the outstanding Martin Grogan led the Eire Og’s challenge from defence. John Kerr formed a useful midfield alliance with Aidan Kelly, who once again delivered an impeccable display of scoring power from play and frees, as the Tyrone champions defied their underdogs tag with some quality hurling.
The running of Conor Grogan, Seamus McLoughney and the industry of Paul Hughes and Justin Kelly in particular frustrated the Johnnies throughout and, with a little luck on their side the Eire Og’s could have been celebrating a famous victory.
Aidan Kelly handed Carrickmore an early lead, but within three minutes St John’s struck for two goals through the lively Brian McFall. It gave the Belfast men a commanding lead and even though Liam Boyle, Colm McFall, captain Michael O’Neill, Barry McFall and Conal Morgan were leading by example Carrickmore responded superbly to the challenge.
Grogan drilled home a quality goal and after Grogan and Kelly pointed midfielder Kerr launched over a stunning effort from distance to reduce the margin 2-3 to 1-4 after 17 minutes play. Two further Kelly points brought the teams level by the 23rd minute, but just when Carrickmore were dominating they squandered several chances to take the lead.
St John’s goalkeeper Cunningham produced a superb save to thwart a McLoughney effort before a McFall sideline effort edged the Antrim men into a 2-4 to 1-5 interval lead.
Aided by the introduction of Tony Hughes Carrickmore continued to make a real fist of it and, in the 8th minute, they were given an excellent chance to take the lead, when referee Eamon Hasson awarded a penalty. Justy Kelly’s well-struck penalty was helped over the bar for a level game. McFall and a sublime Aidan Kelly effort from distance ensured that the game remained in the balance entering the final quarter and when both men traded points again for a 1-9 to 2-6 score line it was shaping up for a cracking finale.
Carrickmore though remained a threat with impressive St Johns goalkeeper Cunningham producing a stunning save to deny Justin Kelly a certain goal and boosted by his heroics St Johns upped the tempo. McFall, who was their main scoring source throughout the afternoon, helped the Belfast men into a three-point lead but Carrickmore came storming back. Kelly saw a screamer crash against the woodwork on its way over the bar for a 2-9 to 1-10 score line and, even though he added another point in the third minute of stoppage time Carrickmore were unable to find the goal they needed to rescue their championship aspirations. Disappointment for John Crossey’s men, but they can be proud of their efforts on the day against a St John’s team capable of holding their own in the top tier of Antrim hurling.