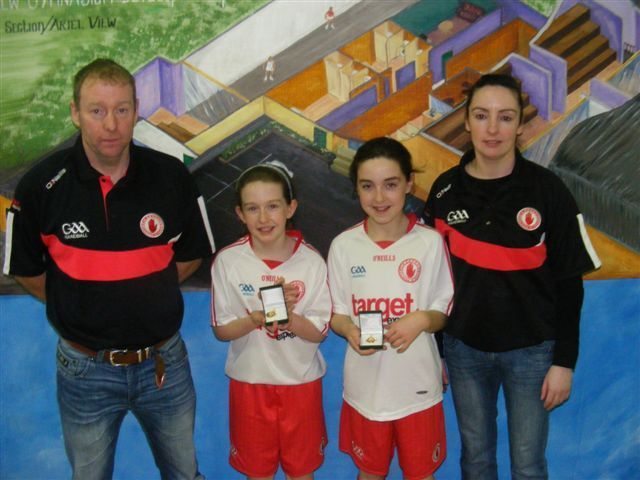 Tyrone Handball was well represented by their Juveniles at this year’s Ulster Finals in Kingscourt.

Sean Kerr (Brackey) led the way in the Boys section and set the tone for the day as he lifted Tyrone’s first title
with a win in the the u13 boys singles. This was followed up by several doubles titles as Pauric Mullan (Carrickmore) and Dara Mc Dermott (Greencastle) collected the Boys Under 13 title. This win was followed up almost immediately by a solid performance from Carrickmore pair Niall Allison and Ronan Mc Kay as they succeeded in winning The Boys Under 14 title. Following on from that there was further Tyrone success at Under 16 as Patrick Mc Crory of Carrickmore and Pol Clarke of Brackey also lifted the Doubles title.

In Girls section there was further doubles success this time starting with Ciara Mullan and
Michaela Mc Cartan (Brackey) at Under 12.u13 Eilise Mc Crory (Brackey) and Sinead
Donnelly (Loughmacrory) at Under 13 and Laura Mc Glone and Claire Mc Donald (Pomeroy) at Under 17 won their competitions to add to the growing list of Tyrone winners. Meanwhile in the singles there was a good win for Meave Mc Elduff (Brackey) in the u16 singles.

There was some fanastic handball produced through out the day and Tyrone were involved in some excellent games in both singles and doubled throughout the day. Indeed they can consider themselves most unfortunate in u12 boys doubles as Ciaran Cuddy and Cormac Munroe just came up short. It was a similar story for Loughmacrory girl Aoife Kelly in u14 girls while in the u16 boys, Gavin Mc Crystal pushed Irish number one seed Darren Doherty all the way.

Work now begins for next weekend as all winners from u14 to u17 will go
forward and represent Ulster in the All Ireland Juvenile semi Finals in
Leinster.

U15 Singles     Final between Monaghan & Tyrone not being played till Monday