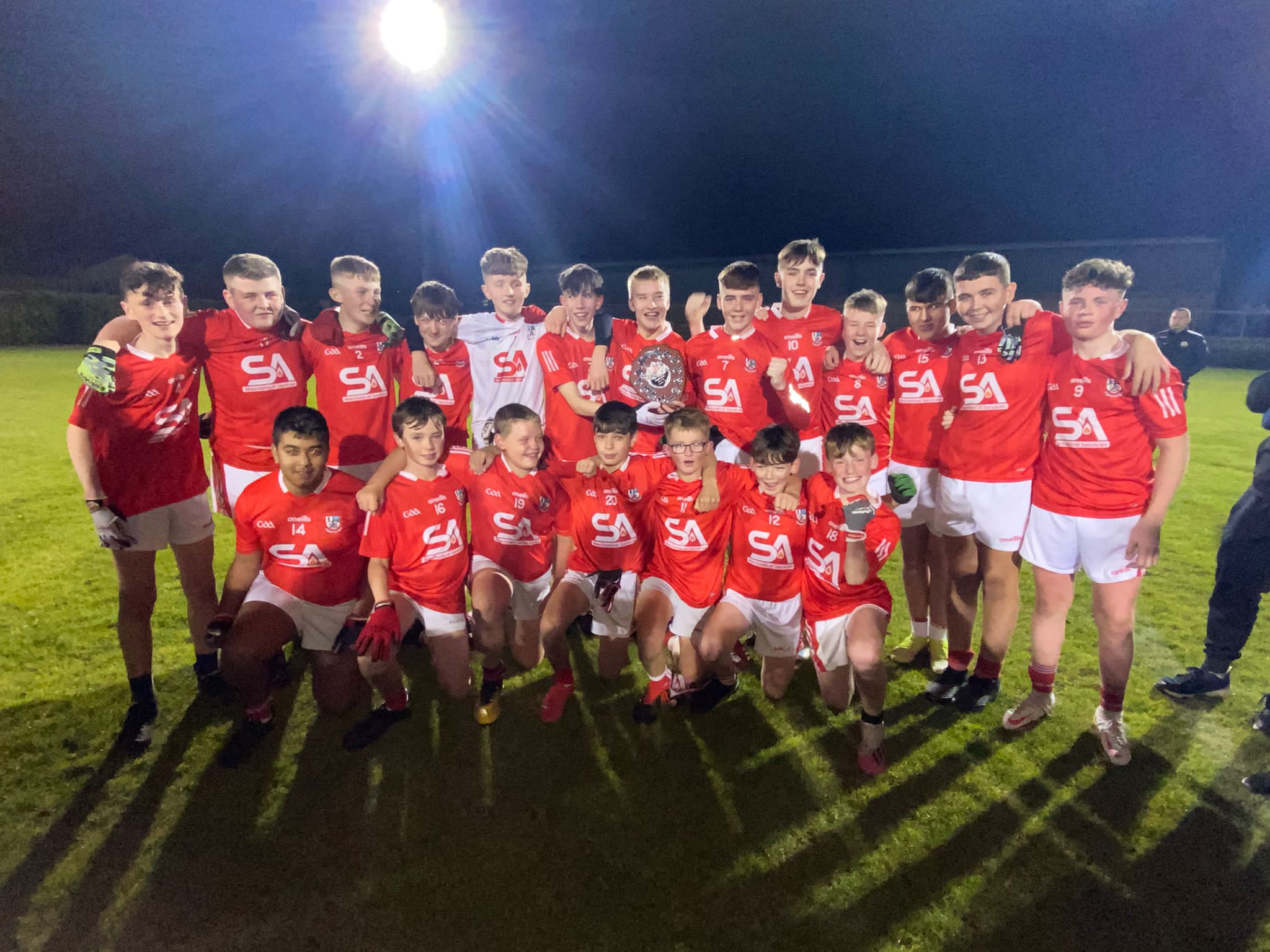 Anyone worried about the state of the underage game in Tyrone should have been in Galbally on Wednesday evening to witness a pulsating encounter between two fabulous U15 grade 4 teams.  It might well have ended as a draw at the end of extra time but somehow it was fitting that one team found a way to win the game and spare both sides from a penalty shootout.  Brackaville eventually came out on top to end a seven year wait since they last took a trophy into the Owen Roes club.

Brackaville opened the scoring in the 3rd minute of the game.  Conor McGuigan firing home a left footed shot to the Tattyreagh net.  It took Tattyreagh five minutes to respond to that score but when they did it was the excellent Cormac Darcy that found the net for the St Patrick’s lads.  Brackaville hit back almost immediately.  Ryan O’Neill and Marc Thompson scoring for the Owen Roes side.  Tattyreagh hit three of the next four score in the game through Eoghan McGrath however with Brackaville’s score was a second goal scored this time by Cailum Coyle.  Brackaville’s last point of the opening half came in the 19th minute via Sean Daly while the last two scores were landed by Cormac Darcy and Eoghan McGrath.  It meant that the Tatt’s trailed by one point at the break.  Half Time – Brackaville 2-3 Tattyreagh 1-5

Scores were a little more difficult to come by in the second half.  Particularly from a Tattyreagh point of view.  They had definitely enough chances to win the game after several opportunities rebounded off the posts and crossbar.  The opening score of the half came from Brackaville substitute Kealan Herron.  That score was followed by Tattyreagh’s first score from one of their own substitutes Brandon Downey.

Another point from a free from Eoghan McGrath brought Tattyreagh level.  Brackaville restored the advantage again the 35th minute with a Cianan Rouse point only for the Tatt’s to hit back with a point from Brandon Downey in the 44th minute.  A minute later a Ryan O’Neill point put Brackaville ahead once again.  They look favourites to hang on for the win.   Tattyreagh had other plans.  A superb piece of teamwork moved possession into the hands of full back Finbar Darcy who pulled the trigger and hit the equaliser with a minute of normal time to go.  Full Time Score – Brackaville 2-5 Tattyreagh 1-8.

Brackaville opened the scoring in extra time with a free from Kealan Herron in the 3rd minute.  That score would be their last point of the half.  Tattyreagh landed the next four scores of the game.  Cormac Darcy and Brandon Downey landing a brace of points each to put the St Patrick”s men in three points up at the break.

Brackaville got the perfect start to the second half of extra time.  Ryan O’Neill slamming the ball to the Tattyreagh net in the 1st minute to level the game once again.  A Brandon Downey point in the 5th minute would prove to be the Tatt’s last score of the game.  Brackaville levelled the contest in the 8th minute thanks to a Conor McGuigan point.  A Sean Daly 45 eased Brackaville into the lead in the 10th minute before superb Aaron Callan goal completed the scoring in a superb encounter.  Final Score – Brackaville 4-8 Tattyreagh 1-13.