Home | Cassidy Returns To Clonoe As Manager For 2011.

Cassidy Returns To Clonoe As Manager For 2011.


Former Derry star Damian Cassidy is back in management after being appointed to take charge of Clonoe for the 2011 season. It’s the second time that the Bellaghy man will be in charge of the O’Rahillys and no doubt he would settle for a repeat of 2008 when he guided them to the O’Neill Cup by defeating defending champions Dromore after extra time in the final. He left after one year at the helm to take charge of Derry but after a disappointing league and championship campaign in 2010 he stepped down from that post.  Meanwhile it has been rumoured that another man from the Oak Leaf County is also destined to be in charge of a leading Tyrone senior club side next season. Ballinderry club man Paul McIvor is set to renew acquaintances with Ryan Porter at Dromore. McIvor and Porter previously worked together with Donegal seniors when McIvor’s father Brian was manager. 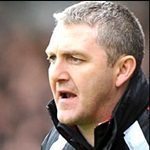