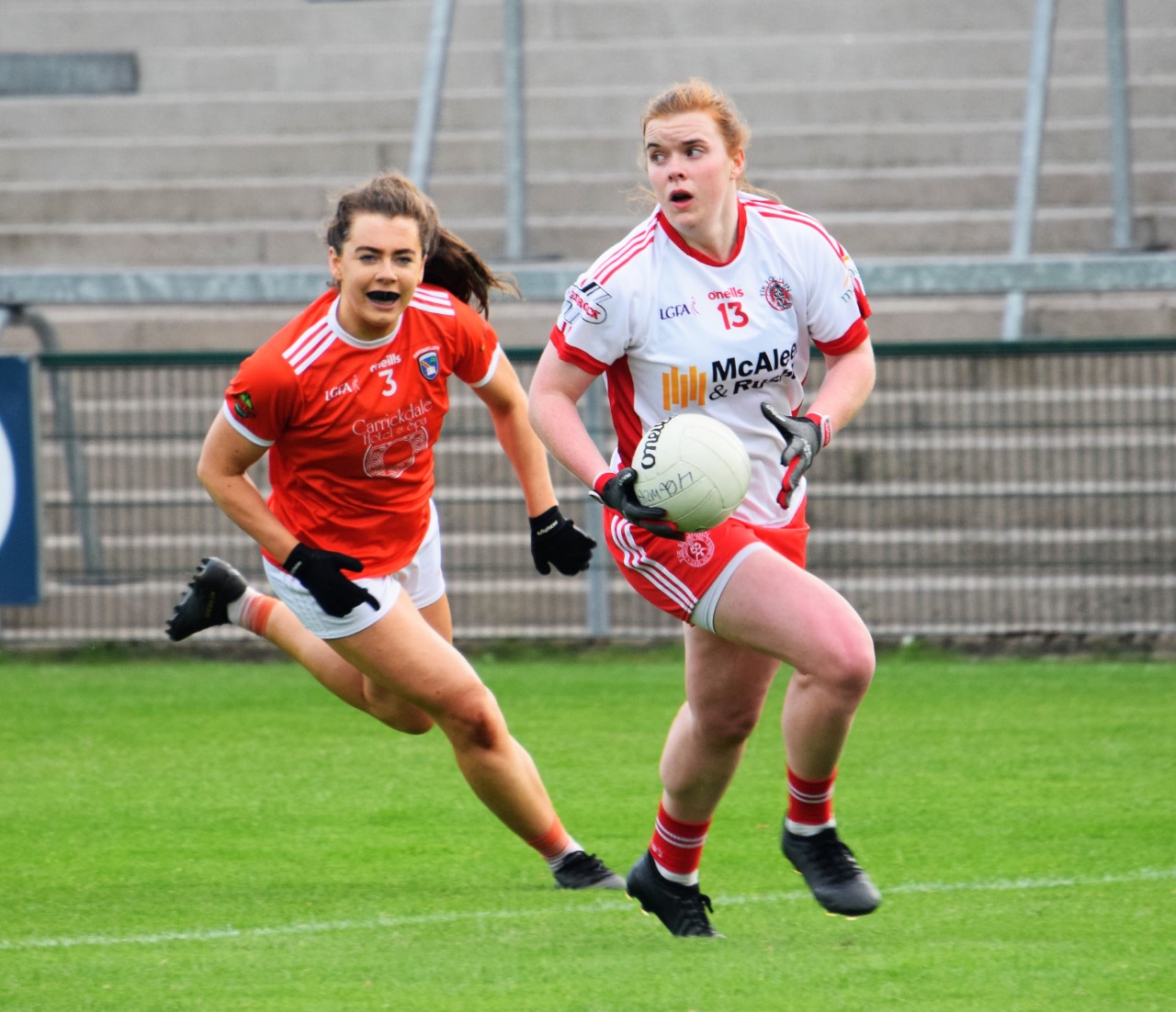 The gulf in class between Tyrone and Armagh was emphasised with a second half scoring spree in Friday’s Ulster championship semi-final at the Athletic grounds that helped power Armagh to the decider next month with thirteen points to spare.

Tyrone led for much of the first half but four points in three minutes just before the break had the hosts three points up at the break. They then hit the gas after the restart, hitting 2-6 without reply to leave the Red Hands with a mountain to climb.

Throughout the contest Tyrone battled hard. They looked assured and confident during the opening twenty five minutes of the game but it was Armagh who held the aces as Tyrone looked limited in attack. The hosts hit ten first half wides and brought out the best in Tyrone goalkeeper Laura Kane on more than one occasion. Tiarna Grimes, Niamh Marley and Caroline O’Hanlon created acres of space in the opening half yet credit to Emma Mulgrew and Emma Brennan as they withstood the Armagh attack time and again leaving life difficult for the Orchard forward unit. Armagh took time to settle, but boy when they found the mark it was a remarkable scoring display.

Indeed once Ronan Murphy’s side threw off the shackles during a dominant eight minute spell they scored at will . Fionula Mc Kenna, a previously quiet Aimee Mackin and Alex Clarke among the points as Aoife Mc Coy and, with her first touch in the game, Kelly Mallon, got the goals.

Tyrone rallied in the latter stages, stabilising things at the back but the damage was already done. Despite the best efforts of Niamh O’Neill, the endless runs of Grainne Rafferty, a couple of excellent scores from Caitlin Kelly and Reagan Fay, as well as some great work from Dearbhlie Gallagher, they were a beaten docket

After four early Armagh wides, Tyrone grew in confidence and got the scoreboard moving seven minutes in when Niamh O’Neill sent a delightful ball left to Niamh Mc Girr who fired in a goal. The sides traded several wides apiece before Eve Lavery opened the Armagh account on eleven minutes with a long range point.

O’Neill landed the first of her seven points moments later but a quickfire three points from Fionula Mc Kenna, O’Hanlon  and Blaithin Mackin levelled proceedings for the first time.

Tyrone reached the first water-break ahead, O’Neill launching a mammoth score from distance as Caitlin Kelly was unlucky with her long ranger dipping into the hands of Orchard keeper Anna Carr. Both teams coughed up possession easily after the short break, O’Neill and Mc Kenna traded frees while Chloe Mc Caffrey went close for a second Tyrone goal, one on one with Carr, the keeper managed to guide the shot out of danger.

The closing stages of the first half flagged up the warning signs for Tyrone. Clarke steered over a fine point to level things again, Mc Kenna nudged Armagh ahead before she was on hand to pick up a poor clearance and dropped over a simple chance. Mackin’s stinging effort seconds later was turned over the crossbar by Kane with the goal opening up for the talismanic Armagh attacker.

The half time gap of three was quickly reduced to two right after the break with Aoibhinn Mc Hugh doing well out on the right to hit a fine point. Gallagher was introduced at the break for the injured Mc Girr and she certainly brought a new dimension to Tyrone but as she, Emma Hegarty, Mc Hugh, Neamh Woods and O’Neill tried to press on for Tyrone it was as if someone flicked a switch for Armagh as  they just  pulled away, six points the advantage within seven minutes.

Mc Kenna hit three points after Aimee Mackin was on hand with an early second half score and when Mc Hugh saw an excellent effort drop short and Kelly drilled over from distance Tyrone were sadly on the backfoot for the minutes that remained.

Lavery, Mc Coy, Mackin and Clarke hit points, Mc Coy stole in for a goal, Mc Kenna and a stunning Mackin point from out on the right added to their tally before Mallon came off the bench and drilled in Armagh’s second goal, all in all eight minutes of blitzkrieg by Armagh. Tyrone were left shellshocked and they looked it.

Just before the second water break O’Neill went close for a goal before having to settle for a point while Mc Caffrey saw a goal chance steered out wide. Tyrone introduced a series of substitutes to try and stop the rot but to little avail.

Hegarty was yellow carded on fifty three minutes but Tyrone coped well, even when Woods was forced to withdraw with an ongoing injury problem that had curtailed her input throughout the contest.

O’Neill wrapped up her scoring with 0-3, youngster Reagan Fay came off the bench to add to the Tyrone tally although thirteen points was the final margin of victory for a quality, free running Armagh who manager , Edendork’s Ronan Murphy admitted, he wanted to see more clinical.

Another disappointing outing then for Tyrone who now face two crunch all Ireland group games against Waterford and of course all Ireland champions Dublin at Cavan on Saturday.