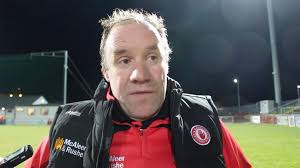 Tyrone joint manager Fearghal Logan has revealed that there is a mixed bag of news ahead of the All Ireland champions opener against Fermanagh on Easter. Saturday at Brewster Park.

Mattie Donnelly came on as a sub in the win over Kerry last day out but he only lasted a few minutes before going off with a hamstring injury and it looks as though he will be in a race against time to be ready for the preliminary round. Allstar midfielder Brian Kennedy is expected to be fit and Michael O’Neill could see game time for the first time since the All Ireland Final victory over Mayo. Peter Harte is another doubt having had his appendix removed a week ago but should be ready for Brewster Park.

“Mattie has a hamstring injury and he’s working hard as you would expect,” said Logan.

“You know his style, he’s rehab, rehab, rehab, and he’s working as hard as he can to get everything sorted out and hopefully he can.

“Brian had a minor enough niggle and he was unlucky in that he had a gash and took a few stitches, which was an unlucky injury. But we hope that Brian will be on full form.

Michael is very close. He’s back up and at it, full training, full playing, so it’s a matter of competition for places, but he’s back. It’s one of these general abdominal, pelvic things that happen to players when they train hard.”

It has been well publicised that seven members of last season’s all conquering squad are no longer there but Fearghal has resisted the temptation of calling up any U20s just yet.

“We have to work with what we have here, and that’s the fundamentals of life,” he said.

“We have a good squad of footballers with serious ambition, and we would expect them to do well as a group.

We hope that they’ll go the full way, and there’s no pressure on that way at all. We’re just keen to say that they get on well and have a good run, and then we’ll see. And that will develop those young lads as players.”