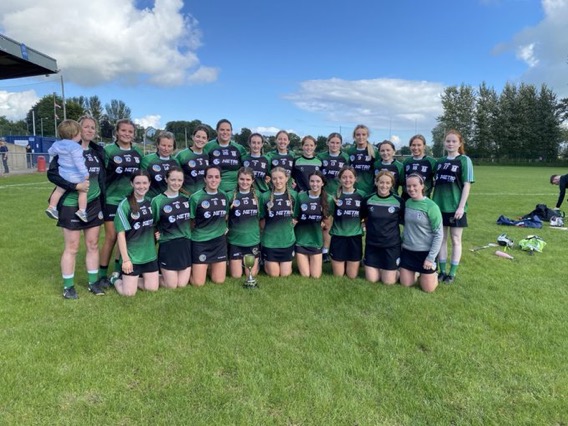 Showing real character in the final ten minutes Eglish eventually claimed the Tyrone senior camogie title with ten points to spare at Moy in what was a hugely entertaining decider against underdogs Naomh Treasa in their first final. The margin of victory looked impressive but it took nine unanswered Eglish points during the closing stages to pull themselves clear as Dungannon had closed to within a single point after Cora Mc Grath turned in her side’s second goal after the waterbreak.

Experience was always going to play a key part in the outcome of this first senior final in several years but belief too played a massive part for the Naomh Treasa  side who played their part over the hour with some excellent performances. Grainne Rafferty, goalkeeper Eimear Colton, Laura Barker, Mc Grath and Cara Little pressed hard while Beth Jones and Orla Foley did sterling work.

Francine Farley, full back, Catherine Muldoon, Ciara and Leanne Donnelly played key roles  for the champions and while they led from the start they just couldn’t shake off the new girls on the block until the final minutes. In the end they were worthy winners.

Reagan Fay opened the scoring inside two minutes and Eglish built up a head of steam leading 1-6 to 0-3 at the break with both goalkeepers, Colton and Julie Lagan called into action through a keenly contested half.

The Eglish goal came after Casey Gallagher’s long ball was turned along the line by keeper Colton before Kaitlin Gallagher forced it in. Points from Ciara Donnelly and Olibhhia Farley had kept the St Patrick’s ahead with a brace from Mc Grath and pointed free from Beth Jones all Dungannon had on the board despite some great camogie from them.

Two minutes into the second half Dungannon were back in the contest when Cara Little’s long range effort found the Eglish net. A double from Donnelly kept Eglish ahead with Jones and substitute Roisin Mc Erlean landing crunch scores for Naomh Treasa before the second waterbreak.

Donnelly dropped over a massive score after the restart but again Dungannon were back in the game and just a point shy of Eglish when Mc Erlean’s long probing ball was turned past Lagan by Mc Grath.

Farley’s tidy point settled Eglish nerves and in the final ten minutes they eased over the line, Donnelly with four points among scores from Farley, Leanne Donnelly, Gallagher and Amy Barrett as they ran out ten point winners.

No disgrace for Dungannon in their first final. They played well but just lacked that belief to carry them to the win and Eglish, a quality performance especially in the latter stages when character was needed.