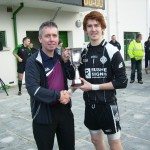 Omagh secured back to back minor doubles when they recorded a 0-13 to 0-9 victory over Dromore in the league decider at Drumragh on Saturday afternoon. The game got off to an explosive start when Dromore centre half back Aodhan O’Donnell was straight red carded for a foul on Ronan O’Neill with less than thirty seconds gone on the clock.

With a man advantage Omagh dominated early on and by the thirteenth minute they led by five points 0-5 to no score with Conan Grugan, Cormac O’Neill, Cormac Hannigan and Ronan O’Neill all on target. Niall Slevin eventually opened the St. Dympna’s account and that was the catalyst for a superb comeback and efforts from Collie Mc Rory, Niall Sludden and left half back Thomas Mc Carron left them a point adrift at the break trailing 0-7 to 0-6. By this stage Omagh had also been reduced to fourteen men following the sending off of defender Ciaran Canavan as a result of a second yellow card.

On the restart substitute Stephen Murphy  and Grugan increased Omagh’s advantage but an excellent score from Sludden from out on the right wing closed the gap to the minimum between the sides going into the final quarter. Omagh though managed to restrict their opponents to one further score as they finished strongly with points from Grugan, Murphy and Cormac O’Neill to run out worthy winners. Dromore finished the game with only thirteen men when defender Ruairi O’Neill was sent off by Moy official Simon Brady.